When It Happens by Susane Colasanti 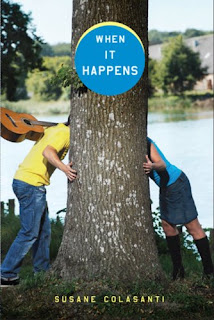 
Synopsis: At the start of senior year, Sara wants two things: to get into her first-choice college and to find true love. Tobey also wants two things: to win Battle of the Bands and to make Sara fall in love with him. Dave, the boy Sara was hoping would realize she exists, moves in on Sara first. But Tobey is impossible for Sara to ignore. He gets the little things that matter to her and, most importantly, he feels like something real. Can a slacker rock star wannabe win the heart of a pretty class brain like Sara? Hilariously and movingly told through Tobey's and Sara's authentic voices, Susane Colasanti's debut novel sizzles in its portrayal of two teens searching for the one.

Summer is coming to a close as Sara prepares herself for her senior year. She wants her last year of high school to be something special, unlike the last three unmemorable years being known as a nerd. But what she really wants is to have a boyfriend, "someone who's the real package". Her dream of finding the perfect boyfriend seems to come true when Dave, the hottest boy in school asks her out. As their relationship moves along, Sara is thrilled that she finally has the guy she's wanted for so long but....she feels like something's missing. Meanwhile, on the other side of the social spectrum lies Tobey Beller, a loveable slacker with blue eyes and a quirky wit who has his eyes set on Sara. His goal of winning Sara's heart doesn't seem entirely impossible as sparks fly between the two of them, despite their differences.

I liked that this book was told in alternating points of view. You read so many YA novels and most of them seem to be told in a girl's P.O.V. so it was refreshing to read about two teens falling in love while hearing from both sides. Sara is like most girls, hoping that she'll find someone who loves her for who she is; Tobey fills in that role perfectly. I loved the way he would remember all the little details, from her favorite drink to her favorite movie scene from Say Anything. He even goes so far as to recreate that very moment and reading that made my heart melt. These two are adorable together!