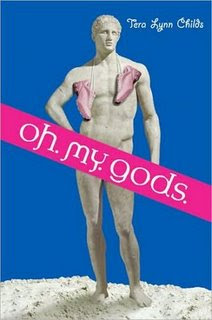 Synopsis: A modern girl's comedic odyssey in a school filled with the descendants of Greek gods. When Phoebe's mom returns from Greece with a new husband and moves them to an island in the Aegean, Phoebe's plans for her senior year and track season are ancient history. Now she must attend the uberexclusive academy, where admission depends on pedigree, namely, ancestry from Zeus, Hera, and other Greek gods. That's right, they're real, not myth, and their teen descendants are like the classical heroes—supersmart and superbeautiful with a few superpowers. And now they're on her track team! Armed only with her Nikes and the will to win, Phoebe races to find her place among the gods.

Phoebe's shocked when her mother tells her that she's marrying another man and moving them to Greece. She can't understand why her mother would want to marry a complete stranger. But her mother forces her to leave her two best friends behind and board a plane to her new home in Greece. There Phoebe finds out that not only does she get a new step-father (and a horrible step-sister) but that she's going to attend an academy full of teens that are descendants of the greek gods! Phoebe's luck gets worse when she realizes she's the only one at the school without any celestial ancestors, automatically making her the odd one out.

Phoebe was a funny character-she had a lot of problems with her mother marrying another man-especially since she was still dealing with her dad's death. She loves her dad and admits that she runs track just so she can feel close to her father again (which I thought was sweet). Once she get to the island, she is awe-struck by how beautiful the it is (and gets even more amazed when one incredibly handsome guy comes along...). However, she has to deal with Stella, her monstrous step-sister hell-bent on getting rid of her and as for that handsome guy she saw at the beach? Griffin (a.k.a. the obnoxiously good-looking jerk) turns out to be nothing but trouble! Things get much worse when she goes to a school where everyone is super-beautiful, super-smart and super-annoyed that Phoebe is there. Talk about intimidating! Refusing to be beatten (and not admitting to herself that she likes Griffin just a little), Phoebe decides to show everyone that she's a force to be reckoned with, greek gods be damned. I liked that she decided to pave her own way and not just accept the cards that were given to her. What was especially cool was that every teenager that was a descendant had traits reflecting who their ancestors were (mythology is weaved into the story very nicely) As for Griffin....well, there's a reason why they constantly bump into each other (and thus pissing each other off). Phoebe doesn't want to like him-but she does and I love how she acts when she gets stuck with him. All in all, a great book that should be read immediately.