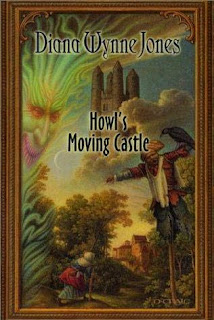 Reading level: Ages 9-12
Publisher: Greenwillow Books
Release Date: April 22, 2008
Language: English
Source: Library
Synopsis: In the land of Ingary, such things as spells, invisible cloaks, and seven-league boots were everyday things. The Witch of the Waste was another matter. After fifty years of quiet, it was rumored that the Witch was about to terrorize the country again. So when a moving black castle, blowing dark smoke from its four thin turrets, appeared on the horizon, everyone thought it was the Witch. The castle, however, belonged to Wizard Howl, who, it was said, liked to suck the souls of young girls. The Hatter sisters—Sophie, Lettie, and Martha—and all the other girls were warned not to venture into the streets alone. But that was only the beginning.In this giant jigsaw puzzle of a fantasy, people and things are never quite what they seem. Destinies are intertwined, identities exchanged, lovers confused. The Witch has placed a spell on Howl. Does the clue to breaking it lie in a famous poem? And what will happen to Sophie Hatter when she enters Howl's castle? Diana Wynne Jones's entrancing fantasy is filled with surprises at every turn, but when the final stormy duel between the Witch and the Wizard is finished, all the pieces fall magically into place.


Sophie lived in the town of Market Chipping, which was in Ingary, a land in which anything could happen, and often did -- especially when the Witch of the Waste got her dander up. Which was often. As her younger sisters set out to seek their fortunes, Sophie stayed in her father's hat shop. Which proved most unadventurous, until the Witch of the Waste came in to buy a bonnet, but was not pleased. Which is why she turned Sophie into an old lady. Which was spiteful witchery. Now Sophie must seek her own fortune. Which means striking a bargain with the lecherous Wizard Howl. Which means entering his ever-moving castle, taming a blue fire-demon, and meeting the Witch of the Waste head-on. Which was more than Sophie bargained for. . . .


After seeing Howl's Moving Castle in movie form, I wasn't sure what to expect when I picked this up. It's common knowledge that the movies are never exactly like the books so when I started reading HMC, I knew that it was going to be interesting (because Diana Wynne Jones is anything but boring) but not entirely sure if I would like it like I did the movie. (Amaaazing movie. Totally recommend it if you haven't seen it!). I was pleasantly surprised by the time I finished. The only word that I can use to completely sum up this book is clever. The characters were wonderfully quirky, the dialogue was never forced and the way Sophie handled her situation (and Howl) was incredibly funny. The plot was unique and I had mini bursts of surprise as each chapter ended. No major curveballs but there were moments where the characters took me offguard and I'd have to reread some sentences, thinking, what just happened here!? Howl was definetely an interesting character. He'd seem so shallow (wearing an enchanted suit to attract the ladies) and useless but then he'd conjure a spell from his sleeve and be almost heroic. The way he and Sophie bantered was fun to see. Their relationship unfolds in an unusual but charming manner. Overall, Howl's Moving Castle was great. It was like a complex disney movie.