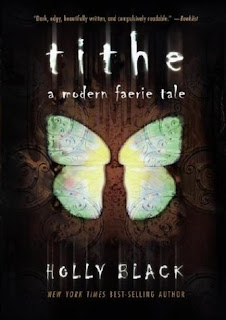 Synopsis: Welcome to the realm of very scary faeries!Sixteen-year-old Kaye is a modern nomad. Fierce and independent, she travels from city to city with her mother's rock band until an ominous attack forces Kaye back to her childhood home. There, amid the industrial, blue-collar New Jersey backdrop, Kaye soon finds herself an unwilling pawn in an ancient power struggle between two rival faerie kingdoms — a struggle that could very well mean her death.

Who doesn't love the mysterious world of faeries? I happened to stumble upon this book in a moment of boredom. (I love when that happens! I tend to pick some of the best books randomly! :D) I thought Tithe was great. The plot was good, Kaye was a fun character and her entire situation was way too interesting to ignore. Her faery friends from childhood warn her of an impending war between the two Faery Courts and that she's the only one who can do something about it. A lot to tackle for a sixteen-year-old! Kaye, however, does what she can to protect her friends and she gets sucked into the dangerous world of fey.
I had fun reading about Kaye; she was honest, edgy and despite having an unstable upbringing, she was capable of many things that led her toward a destiny she never would've dreamed of! Things get even better when Roiben, a faery knight (laugh at the name but Roiben's a pretty fierce character ) shows up and creates even more havoc in Kaye's already chaotic world. Thrown together by fate, these two individuals from completely different worlds team up and take on the faery courts head-on (all while secretly liking each other). This fantastical novel is full of secrets, romance and drama that's alluring as its main character...