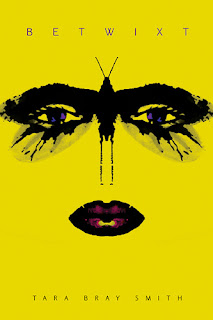 
Synopsis: For three teenagers, dark mystery has always lurked at the corner of the eyes and the edge of sleep. Beautiful Morgan D'Amici wakes in her trailerpark home with dirt and blood under her fingernails. Paintings come alive under Ondine Mason's violet-eyed gaze. Haunted runaway Nix Saint-Michael sees halos of light around people about to die. At a secret summer rave in the woods, the three teenagers learn of their true, changeling nature and their uncertain, intertwined destinies. Riveting, unflinching, beautiful, Betwixt shows a magic as complex and challenging as any ordinary reality.

Apologies for the delay in reviewing this one; I've been having too much fun messing around with my site but today I forced myself to sit down and write out this review. For starters, I'm so happy I finished this one! It took me ages; Betwixt is not fluff-it's intense and so rich in details that every time I put the book down I felt like I was pulling my head out of a sandbox. Betwixt is the story of three Portland teens: Nix Saint-Michael (which I think is a nice name), Ondine Mason and Morgan D'Amici-all from different walks of life who come together when Moth, a mysterious young man invites them to a summer rave; there they discover that they are in fact changelings destined for something far greater than their minds could ever conceive.


The story (all in third person) shifts effortlessly from Nix to Ondine to Morgan and even Moth: the transition is fluid that the reader won't be confused as to who's narrating. Characterization was superb and dead-on, even with the minor characters; each person in the story had something to bring to the table. Nix, a runaway from Alaska, seeks peace from the horrible gift that he carries. Ondine knows in her gut that she's different but she can't pinpoint why... Morgan, vain and beautiful, just knows that there has to be something better for her. And as each teen finds out, their lifes are going to take a jolting turn into the supernatural. The novel was well-written and had a good plot but my only complaint was there is a minor confusion with Nix and two other characters. (I'm not gonna say who!) It also took me forever to read (and then write a review!) on this book because in the beginning I felt that I only caught glimpses of what was going on. It almost felt like I was walking through a fog...but I broke through at the ending. xD
rating: 3.5
Posted by Sandy at 10:51 PM