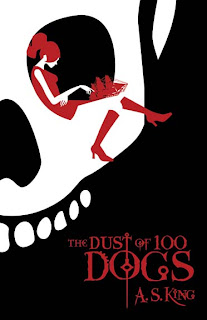 In the late seventeen century, famed teenage pirate Emer Morrisey was on the cusp of escaping the pirate life with her one true love and unfathomable riches when she was slain and cursed with the dust of one hundred dogs, dooming her to one hundred lives as a dog before returning to a human body-with her memories intact. Now she's a contemporary American teenager and all she needs is a shovel and a ride to Jamaica.

Alternating between Saffron's voice in 1st person and Emer's in 3rd, Dust of 100 Dogs chronicles the life of Emer Morrisey, a young girl who grows up during the Cromwell invasion in Ireland. After years of sadness and hardship, she defies everyone by becoming a terror on the open sea. But when she's finally reunited with Seanie, her childhood love, she's ready to leave her past behind and settle down. She looks to the future until fate intervenes; Seanie is murdered before her eyes and before she is killed, she is cursed to the lives of 100 dogs.

Before I start, let me say that this was not an easy read. It wasn't boring or written in a way that I couldn't get... there were many times where I wanted to weep at the tragedy Emer's put through and enough cringe-worthy moments where I had to put the book down, remembering that I wasn't a pirate lost at sea. Alternating between Saffron's voice in 1st person and Emer's through 3rd, Emer's story immediately hits me with how powerful it was. She loses her family in the war and her only solace is with Seanie Carroll, her best friend. Both are children of war and are driven to silence by what they've seen; instead of talking, they sit side by side in contemplative silence and a bond grows between them that blossoms into romance. As time passes, Emer transforms into a fierce pirate, destroying whatever shreds of the sweet irish girl she once was. She slaughters countless men and reserves her hatred for one menacing man in particular... but unfortunately, before she can achieve true happiness, the chance is snatched away. Once her soul finally reimerges as Saffron, she decides to go back to get her treasure.

What I liked about this book was how Emer had the strength to fight back against all the crap she had slung at her. I admired her resilience and how despite everything, she still had hope for something more. Seanie was a character I really liked; their love for each other was so pure...I found that wonderful. I also enjoyed Saffron's sarcasm as she reminisced about being Emer and dealing with her parents. Saffron's parents placed all their hopes and dreams upon her, pushing her to get a better education so she could make something of herself. After having her soul recycled 100 times, she just wanted to return to where the nightmare started and find some sort of closure. Emer's soul shined throughout the entire novel; instead of carving my eyes out (which is Emer's signature mark), she pried them open with how bittersweet her life was the first time around. The book's hopeful ending pacified me, making me happy for Saffron's epiphanies.

This book was not what I expected AT ALL. A.S. King managed to create a tale so powerful that it could knock all the other books off the shelves!