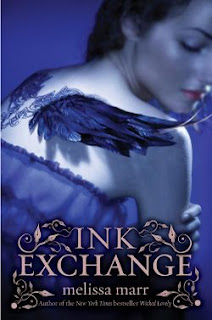 Synopsis: Unbeknownst to mortals, a power struggle is unfolding in a world of shadows and danger. After centuries of stability, the balance among the Faery Courts has altered, and Irial, ruler of the Dark Court, is battling to hold his rebellious and newly vulnerable fey together. If he fails, bloodshed and brutality will follow.Seventeen-year-old Leslie knows nothing of faeries or their intrigues. When she is attracted to an eerily beautiful tattoo of eyes and wings, all she knows is that she has to have it, convinced it is a tangible symbol of changes she desperately craves for her own life.
The tattoo does bring changes—not the kind Leslie has dreamed of, but sinister, compelling changes that are more than symbolic. Those changes will bind Leslie and Irial together, drawing Leslie deeper and deeper into the faery world, unable to resist its allures, and helpless to withstand its perils...

(SLIGHT WARNING: There are some spoilers so read at your own risk!) Leslie’s noticed that ever since Keenan’s shown up, Aislinn’s been different; she hardly recognizes her friend who splits her time being with Seth, her official boyfriend and Keenan, her “close” friend. Well, whatever. Leslie has enough to deal with-a father who’s never around, a useless brother drowning himself in drugs and her waitressing job that earns her barely enough money to pay the bills. But something’s happened to Leslie that she’s refusing to acknowledge...instead, she’s decided that the best way to erase the past (and reclaim herself) is to get a tattoo. Months pass before her eyes land on the perfect image: inky-black eyes surrounded by shadowy wings. Drawn to the image, she saves up until finally, it’s hers. But then she realizes that the tattoo does change her...irrevocably it seems. What was once her greatest desire turns into her worst nightmare.

In Wicked Lovely, Leslie was a minor character mentioned in passing...in Ink Exchange, though, she is front and center. Frustrated with her life, she decides that the best way to bring positive change is to get a tattoo, a symbolic gesture that proves her body is hers. Her friendship with Aislinn is strained and she wonders why Aislinn seems intent on keeping her away from Keenan’s crowd, especially Niall, Keenan’s (sexy!) older uncle. Leslie’s attraction to Niall grows...and Niall feels the same way. But! (for there’s always a but in these kinds of stories) Niall is part of Keenan’s world and Aislinn, knowing this, tries her hardest to keep Leslie safe. Meanwhile Irial, the King of the Dark Court, begins following Leslie and whenever he’s around Leslie feels connected to him, almost as if she’s a part of him. Ignorant of the faery world, Leslie doesn’t know that Irial’s presence means sinister events are only just around the corner and as she finds out, she must fight to not lose herself in the seductive world of faeries. I was honestly blown away by this book! Leslie had something horrific and in desperation decides that she must get a tattooo. In her mind, it’s the only way to ever regain a shred of normalcy from her old life. Not even Aislinn is the same and Leslie knows she’s holding something back. Then she finally receives that tattoo, Irial shows up and Leslie’s life spirals into oblivion as her involement with Irial grows to epic proportions. Leslie then finds out everythnig about the faery world, how its influence s are greater then she’s ever known and that she becomes instrumental in the Dark Court's survival. Despite Irial being the villan, you can’t help liking him a little...his main concern is how to regain his court’s strength since Beira’s (the last Winter Queen) death has crippled it enormously. Niall has his own past and as the story unfolds, you see how his relationship with Irial continues to plague him even though his loyalties lie with the Summer Court.. Ink Exchange is a amazing novel that depicts its characters perfectly, showing each one’s vulnerabilities and that difficult decisions must be made. It’s bittersweet, wonderful and proves that the choices you make hace an impact on everyting.