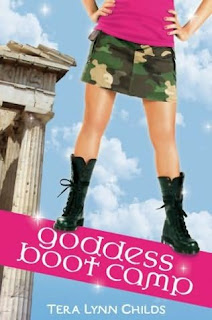 Synopsis (my own!):Phoebe's been doing great so far-her BFFs back home know about her goddess ancestry, her new step-family doesn't bother her (although she's still wary of Stella), she's training for the Pythian Games (which is just like the Olympics) and she has Griffin, her beautiful, blue-eyed, oracle-fated boyfriend. Everything would be fine... if it weren't for the fact that she can barely control her new-founded powers. From accidently zapping her toes off to turning her step-sister into a birthday cake, Phoebe has no idea how to keep her powers in check and Damian, her stepdad decides to send her to Dynamotheos Development Camp, also known as Goddess Boot Camp. Which is all good and dandy until Phoebe gets there and sees that all of her campmates are ten-year-olds...

My brain needed a vacation from N&S...so what better place to travel to than the island of Serfopoula? Great weather, lovely beaches and a lot of godly disasters! Phoebe's been with Griffin for nine months and she's still head-over-heels for him. (yay, love!) I really liked their relationship and how he was so sweet with her (such a nice change from OMG. He wasn't exactly charming...but he redeemed himself in the end.). The only problem is that his friendliness extends to everyone-including Adara, his evil ex. Phoebe feels threatened by Adara and even more so when Griffin seems to spend more time with her and less with Phoebe. Good thing she's got Troy and Nic on her side. I missed these two: they're really good friends to Phoebe. (I felt they were way better than Nola and Cesca). So while wondering if Griffin's cheating on her, she has to train AND learn to master her unruly powers before she does something catastrophic. The Fates seem to like laughing at her because her camp counselors are Stella and (holy nike!) Adara, her least favorite people.

Goddess Boot Camp was an excellent sequel to Oh. My. Gods. Phoebe is still charming, and all the accidents she gets into are hilarious. Stella's gotten a lot nicer in GBC and Phoebe learns not to see her as the enemy, even if they have nothing in common. Xander, a new character, was pretty cool. I wish he could've made an appearance in OMG. As for Adara...we get a glimpse into her life and there's an unexpected surprise. I'd definetely recommend this series to anyone that wants to read something that's fun (and has substance!) So if you see this or Oh. My. Gods, I say buy it! It's worth the money.