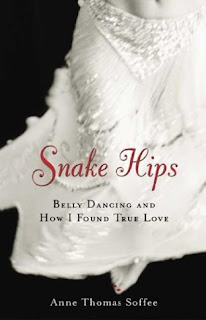 After being dumped by her loser boyfriend, Soffee, a "sober, nerdy, rock 'n' rolling, coffee-drinking, school-teaching, erotica-reading, kitsch-loving Lebanese American" moves back home to Richmond, Va., to wallow in self-pity. There, she comes across a flier advertising the usual classes in yoga, vegetarian cooking, ballroom dancing and... belly dancing. Her girlfriends think she's lost her mind, but Soffee knows she's found the perfect distraction. Not only does belly dancing have nothing to do with her ex, it's a fine way to reconnect with her Lebanese roots. Plus, "it is a relief to be part of a subculture where younger and thinner do not automatically equal better." Soffee learns to roll her hips, shimmy and make her stomach poof out; spends wild amounts of money on the tackiest costumes imaginable; and most satisfying discovers the ultimate cool of "belly dancer bonding." Her ethnic high leads to marital fantasies, e.g., being "third-favorite wife" to a young sheik she's cyber-dating, although she admits "being obedient is easy on-line." She also has flings with an insufferable Iraqi yuppie and a born-again Lebanese boy-next-door all hilarious disasters. Soffee's women friends keep her from feeling too lousy ("[t]he good thing about girlfriends is they usually hate your exes before you do") until Mr. Right catches her by surprise.

Feeling dejected from her break-up (stupid tattoo-artist, scenester loving boyfriend!), Anne retreats back to her hometown of Richmond and takes up bellydancing as a way of distraction. This hobby turns into a way of life as she meets new friends, potential boyfriends (the first two (as mentioned above)are duds but the third one's the charm), reconnecting with her roots and learns how to undulate. All while in her thirties. Impressive. Soffee's voice is witty, sarcastic and her enthusiasm for the art of bellydancing practically leaps off the pages. So much so that I wanted to learn how to undulate. (because who doesn't want to feel slinky and sexy?) The people she meets when she takes up classes are hilarious, ranging from her flighty instructor Shiva to her friend Nadine, whose gothic tendencies make people blind to the fact that she's one of the sweetest people you'll ever encounter. As for her love life? Her adventures of dating cyber shieks and jesus freaks are hilarious and cringe-worthy. I couldn't wait for each upcoming chapter as she joins bellydancing troupes and deals with bellydancing diva drama. (There's even a topless incident, haha). I had a lot of fun reading Snake Hips and learning about oriental dancing. Soffee's voice made the experience worthwhile. :)