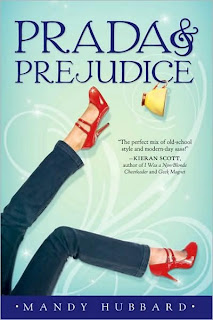 Synopsis: To impress the popular girls on a high school trip to London, klutzy Callie buys real Prada heels. But trying them on, she trips…conks her head…and wakes up in the year 1815!There Callie meets Emily, who takes her in, mistaking her for a long-lost friend. As she spends time with Emily’s family, Callie warms to them—particularly to Emily’s cousin Alex, a hottie and a duke, if a tad arrogant.But can Callie save Emily from a dire engagement, and win Alex’s heart, before her time in the past is up?

Already a few pages in, I knew I was going to have trouble getting through the book. I wasn't a big fan of Callie-it took her forever to get that no, she wasn't getting punked, she really was stuck in another era. I mean, when you're walking down busy streets and suddenly wake up in a dense forest, that's a little suspicious right? Anyways, she stumbles upon a Pemberly-esque mansion and is almost turned away when Emily, one of the ladies of the house, thinks that Callie is Rebecca, her childhood friend from America. Callie's desperate and lets her believe that it's true just so she can have a place to stay until she figures out what to do. The morning after, she gets introduced to Alex, the (hot!) duke of Harksbury and his mother (who's a much tamer version of Mrs. Bennet). As Callie realizes that she's going to be trapped there for a while, she befriends Emily and tries not to oogle Alex.
I liked the idea behind the book but was annoyed with how Callie reacted in some situations. Also, in the beginning it's clear that she's not exactly confident in herself and it takes her a while to shed her self-consciousness. Meanwhile, she makes a disaster of things as she tries to help Emily get out of an engagement and mistakes Alex for being nothing more than an arrogant piece of eye candy. (he later proves to be much more than that). I wish this book could've had a little more conflict; every problem that arises is easily patched up and I felt like that sucked out any possible chance of suspense. Emily was a fun character to read about; she was cute and had fashionista tendencies (involving muslin and laces, of course). Her friendship with Callie was nice to read about. As for Alex, he was a mini-Darcy, always serious and intense. I liked him because he cleaned up the messes Callie left in her wake and because he really was a nice guy, he just happened to be a duke with enormous responsibility on his tailored shoulders. I DO wish I could've seen more moments when it was just him and Callie, just so I could read about his "devastating and disarming smile."
So even though Prada & Prejudice didn't live up to my expectations (I was expecting waaay more action), I'd still say it's worth checking out if you want a quick, breezy read with a hopeful ending. It's fluffy and light. Cake for your brain.
Rating: 2.5
Posted by Sandy at 3:05 PM