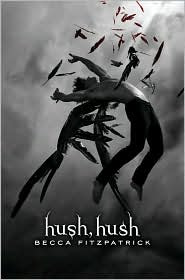 Synopsis: For Nora Grey, romance was not part of the plan. She's never been particularly attracted to the boys at her school, no matter how much her best friend, Vee, pushes them at her. Not until Patch came along. With his easy smile and eyes that seem to see inside her, Nora is drawn tohim against her better judgement. But after a series of terrifying encounters, Nora's not sure who to trust. Patch seems to be everywhere she is, and to know more about her than her closest friends. She can't decide whether she should fall into his arms or run and hide. And when she tries to seek some answer, she finds herself near a truth that is way more unsettling than anything Patch makes her feel. For Nora is right in the midddle of an ancient battle between the immortal and those that have fallen and, when it comes to choosing sides, the wrong choice will cost her life.

When I received Hush Hush in the mail, I was ecstatic! I've only heard good things about this book and once I read the excerpts on Simon & Schuster, I knew that I had to read this book.

I'm happy to say that I was not disappointed. Hush hush delivers the enticing story of Nora Grey, a no-nonsense sophmore who gets paired up in biology class with Patch, the mysterious and arrogant bad boy that we all hate (and love...even if we don't want to admit it). With his dark eyes and mocking smile, Patch both thrills and terrifies Nora... unwilling to let him affect her, Nora tries to counteract her growing attraction by everything she can to stay away from him. But Nora can't push Patch out of her thoughts because after meeting him, scary things start happening and Nora can't shake off the feeling of someone's eyes watching her every move. Her paranoia increases when she realizes that whenever something bad happens, Patch has the habit of always being there, waiting for her with a mischievious smirk. Despite her better judgement, Nora finds herself falling for Patch...but soon discovers that Patch's secrets are darker and graver than she ever imagined-and that now she plays a part in his dangerous game.

I loved Hush Hush. I couldn't put it down, not for a second! I enjoyed watching Nora verbally spar with Patch; he was probably the most maddening, evil, infuriatingly conceited character I've ever come across. But that didn't stop me (or Nora) from finding him quite alluring... I understood why Nora wanted to simultaneously smack him in the face while wanting to fall into his arms; you can't help but like Patch, despite his roguish ways. His unpredictability was what kept me turning the pages... As for Nora, I found her to be a great character and it was funny to see how Patch affected her. She went from cool and collected to hot and bothered the moment Patch entered the room! Their attraction was sizzling, and Patch just made it scorching ;)
So if you're looking for a dark, edgy romance with shots of mystery in between, Hush Hush is the book for you! I'd definetely recommend this novel to anyone who wants to get their pulse racing, whether it be from fear or swooning. Patch will make sure of that for you. (he's sooo my new literary crush-who's with me on this?)