The Kindling of Greenfyr by Mark Freeman 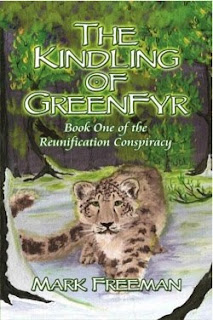 The Kindling of GreenFyr is the story of Owen McInish, an awkward fourteen year old, bullied at school, and friendless except for his pet cat, Piper. That is, until a snow leopard is chased through the woods behind his house by three huge gray dogs with glowing green eyes. Owen saves the leopard from her pursuers, but the animal escapes him as well, only to return later. The cat’s behavior is peculiar, nothing like a wild animal, making Owen even more curious as to its origin. But only when the animal finally allows Owen to touch it, does Owen’s adventure truly begin. Owen finds himself experiencing friendships as he has never before, adventures as he has never imagined, and political intrigue as two worlds, long separated, begin to collide.

I didn’t know much about this book; I hadn’t heard of the author before, the cover didn’t make me go wow! (as other book covers do) and I probably never would’ve heard of Greenfyr if it hadn’t been for 1 ARC Tours. The synopsis did make me curious enough to want to read it, though. I honestly didn’t know what to expect so I started reading it… and realized that Greenfyr was way more interesting than I ever imagined! What really impressed me were the characters: each one had a distinct personality and their relationships to one another, whether they were enemies or comrades, was believable and never felt forced. I especially loved how Owen and Orla’s friendship developed and how their little band of travelers expanded to include many different types of creatures from Orla’s world. (Winter, one of the Aingeals was my favorite) Owen's circle of friends grew along with his confidence. It was so great to see this quiet boy mature into a young man who sees his fair share of battles and death. He even learns how to become an archer and picks up a few fighting skills on his journey to rescue his kidnapped parents. But Owen's not the only one going through a rough time; Orla's in the same boat, trying to figure out why someone would put her in Owen's world, intentionally wipe out her memory and ultimately try to kill her! The two go through a lot together and their experiences help to mold a concrete friendship. (did I mention that they also uncover a conspiracy that threaten both their worlds?) They've got a lot of work ahead of them and I can't wait for the next installment!

I don't think I need to elaborate on how impressed I am with Greenfyr. xD It definetely took me by surprise and I'd recommend this to anybody that wants to go on an awesome adventure :)