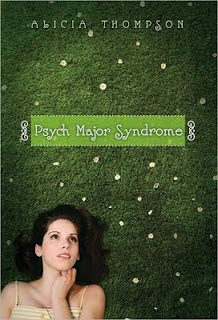 Synopsis: Using the skills you’ve learned so far in Introduction to Psychology, please write a brief self-assessment describing how things are going in your freshman year.
Presenting Concerns: The Patient, Leigh Nolan (that would be me), has just started her first year at Stiles College. She has decided to major in psychology (even though her parents would rather she study Tarot cards, not Rorschach blots). Patient has always been very good at helping her friends with their problems, but when it comes to solving her own…not so much. Patient has a tendency to overanalyze things, particularly when the opposite sex is involved. Like why doesn’t Andrew, her boyfriend of over a year, ever invite her to spend the night? Or why can’t she commit to taking the next step in their relationship? And why does his roommate Nathan dislike her so much? More importantly, why did Nathan have a starring role in a much-more-than-friendly dream? Aggravating factors include hyper-competitive fellow psych majors, a professor who’s badly in need of her own psychoanalysis, and mentoring a middle-school-aged girl who thinks Patient is, in a word, naive. Diagnosis: Psych Major Syndrome

Leigh Nolan is starting her freshman year at Stiles College as a psych major and due to her career choice, (and her somewhat neurotic personality) of course she’s going to over-analyze every little thing. So when she starts picking apart aspects of her life, she starts wondering about a lot of things…but mostly why after a year of dating, she and Andrew, her boyfriend, still haven’t had sex. Or why his shirtless, guitar-playing roommate gives off an air of disapproval whenever she’s around…
What I immediately found refreshing about Psych Major Syndrome was how Leigh was a freshman in college; I don’t think I’ve ever read a book where its MC wasn’t in high school so this was a new take. All throughout the novel I laughed, cringed and smiled along with Leigh as she got into the most awkward situations imaginable. Leigh was a fun character to get to know but I always felt like she’d mentally trap herself into a box, beating herself up with what if’s. But that didn’t make me like her any less: I rooted for Leigh whenever she stood up for herself and had those epiphanies that were long overdue. The brilliance of this novel is only slightly tarnished by its rather hasty (but still totally awesome) ending but its characters more than make up for it. I absolutely adoooore Leigh's new crush. Oh, if only he were real! If you don't like him, then you have a heart of stone (or no heart at all!) Is this really Alicia Thompson's debut? Because I am impressed. Don't be misled by the title because if you pass this one up, you'll regret it.