Such A Pretty Girl by Laura Wiess 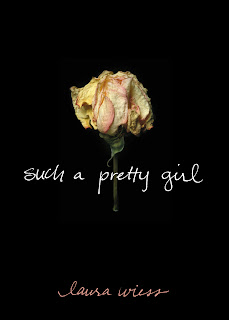 They promised Meredith nine years of safety, but only gave her three. Her father was supposed to be locked up until Meredith turned eighteen. She thought she had time to grow up, get out and start a new life. But Meredith is only fifteen, and today her father is coming home from prison.

Today her time has run out.

Such A Pretty Girl tells the twisted and compelling story of fifteen-year-old Meredith Shale who thought she was safe from her monster of a father. Unforunately, the justice system fails to protect her and after only three years, he is released from prison and comes home to a wife who eagerly accepts him with open arms and a daughter who refuses to pretend that nothing happened.

For such a tiny book, it sure packs a punch! Laura Wiess created such a believable character for this novel. Meredith's voice was so authentic that as a reader I felt completely connected to her; her rage and despair were palpable and I easily adopted her emotions as I read each chapter. The only times where Meredith softened a bit was when she was with Andy, her paraplegic boyfriend who had his own demons to battle. Andy is the only stability Meredith has in her life and when Andy announces that he and his mother are leaving for a short journey the same time that Meredith's dad arrives, she feels the darkness of her father's shadow looming even closer. I was just amazed with how well-written this was. Meredith's feelings were so eloquent and her (now tainted) memories of her father further emphasize the point that everything from the clothes that she wears to the way she speaks is a consequence of the damage that he's done. I think I felt almost every emotion possible while reading Such a Pretty Girl. It was that good. Also, the concept of "victim souls" was woven into the story so perfectly that its ever so slight religous undertone didn't even bother me...I was actually rather curious because I never heard about it before. I do have to warn you though, the content of this book isn't light and fluffy: it deals with incest and rape. It's not a pleasant thing to dwell on but Laura Wiess managed to write about a very difficult subject with such a poetic grace that I know I won't be forgetting about this book for a long time.