A Match Made In High School by Kristin Walker 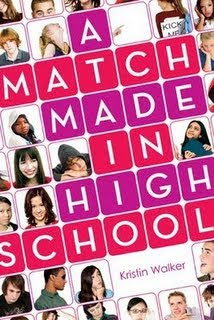 Synopsis: When a mandatory course forces Fiona to “try the knot” with super-jock Todd Harding, she’s convinced life could not possibly get any worse. Until moments later, when her long-time crush is paired with her arch-enemy (otherwise known as Todd’s obscenely hot, slightly sadistic girlfriend). But that’s nothing compared to her best friend’s fate – a year with the very shy, very goofy, very big Johnny Mercer.

A series of hilarious pranks and misunderstandings leave Fiona wondering: is there something her supposed “best friend” hasn’t told her? Could there be more to Johnny Mercer than a deep voice and an awesome music collection? And perhaps most intriguing of all, is it possible that Todd Harding could actually have a heart – and a brain – beneath his pretty-boy exterior?

The idea of being forcibly "married" to someone you hate for one year is a rather scary thought isn't it? This is precisely what happens to Fiona Sheehan, our geeky, sarcastic, I-don't-give-a-crap-about-you-think-of-me! main character. Paired up with her "husband" Todd Harding, a popular male cheerleader, Fiona doesn't think it could get any worse-but of course it does-when Todd's gorgeous cheerleader girlfriend gets Gabe Webber, Fee's long-time crush. With her diploma dangling in the process, Fee's stuck with Todd and forced to endure one year of "holy" (hellish) matrimony.

Within the first few pages I was hooked; Fiona had such a strong, witty personality that it was hard to ignore her. (which basically means I couldn't put the book down!) In high school, everyone's guilty of being judgemental and Fee's no exception. She makes quick judgement calls on everybody she knows but Todd calls her out on it. The bantering and pranks between these two were hilarious! Whenever Fiona was especially snarky, she reminded me a little of Jessica Darling (who is the queen of snark). I kept laughing out loud when they'd have their fights. Every character had a great personality, even the minor ones like Sam, the little girl Fiona babysits. The added element of a surprise romance made the story even more enjoyable. But when it comes down to it, A Match Made in High School is really about Fiona learning to see people for who they are and not what they seem to be (a high school lesson that everyone learns at some point).

Kristin Walker managed to create this funny, wildly entertaining story with a good lesson to be learned. This is easily one of my favorites of the year and definetely pre-order worthy :)

Labels: Around the World Tours, Tenner