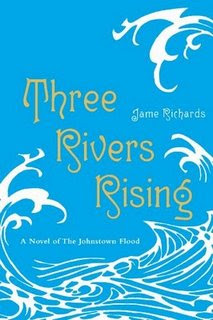 
Synopsis: Sixteen-Year-Old Celstia spends every summer with her family at the elite resort at Lake Conemaugh, a shimmering Allegheny Mountain reservoir held in place by an earthen dam. Tired of the society crowd, Celestia prefers to swim and fish with Peter, the hotel’s hired boy. It’s a friendship she must keep secret, and when companionship turns to romance, it’s a love that could get Celestia disowned. These affairs of the heart become all the more wrenching on a single, tragic day in May, 1889. After days of heavy rain, the dam fails, unleashing 20 million tons of water onto Johnstown, Pennsylvania, in the valley below. The town where Peter lives with his father. The town where Celestia has just arrived to join him. This searing novel in poems explores a cross-class romance—and a tragic event in U. S. history.

Since Three Rivers Rising was in poetry form, it was easy for me to jump right into the novel and follow the lives of each character. My favorite ones were Peter and Celestia: their love for one another felt genuine and had all the intensity and longing of first love. When Celestia's romance is discovered by her family, their reaction is to automatically seperate the two; but Celestia's heart remains loyal to Peter and she decides to risk her place in society to be with him. Back in those times, the way Celestia's family reacted (while terrible) was considered normal and was realistically portrayed in the story. Other characters that appeared were Kate, the nurse in training who, after losing her childhood sweetheart, lost any hope for a future and resigned herself to an empty life and Maura with her husband Joseph (who ends up playing an important role during the flood). I liked how all the characters's interconnected with each other and seeing how each one's lives were affected by the Johnstown flood. I actually didn't know about the Johnstown flood (I guess high school history failed me.) so I got a good historical lesson out of this novel. However, as much as I enjoyed the characters, I felt like the story was rushed and I didn't get to know the characters as well as I wanted to. As for Peter and Celestia's romance, I would've liked to see it develop a little more gradually; but either way, I still thought they were adorable together. Their devotion to one another was sweet. :)

Three Rivers Rising proved to be a quick-paced, entertaining read with a nice historical allusion that I found really interesting and a set of characters that I found to be sincere and authentic. Anyone who likes books in poetry form will enjoy this one.