The Trouble with Mark Hopper by Elissa Brent Weissman 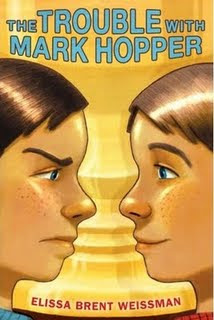 Synopsis: Mark Hopper is the smartest student in the sixth grade, and he knows it. When another Mark Hopper moves to town (the same age, with similar looks), Mark Hopper makes trouble for Mark Hopper. The Mark everyone knows isn't very nice, so the other Mark finds no one will talk to him. The new Mark isn't very brainy, so the other Mark worries that people will think he's a dummy. When a teacher forces them to be study partners, they realize that they can benefit from one another's strengths—and maybe win the Mastermind Challenge together. Trouble is, one of the Marks wants to win so badly that he's willing to steal from Mark.

Once you ignore the unbelievable coincidence of two boys being eerily alike in almost every aspect, ( like same name, same looks... sisters with the same age and name as well!) The Trouble with Mark Hopper is pretty enjoyable. Both Marks have distinctly different personalities: Mark #1 is mean, pushy, and one of those kids you just want to smack for being so smart. In contrast, Mark #2 is sweet, quiet and good with drawing. People in general prefer Mark #2 (once they get over the confusion of who's who...Mark #2 had a lot of trouble adjusting to his new town just because he shares the first Mark's name. It's hard to make friends when everyone you meet assumes you're an annoying know-it-all. ) but Mark #1 could care less about friends. His only concern is winning the Mastermind Competition this year. (and maybe to get his dad's attention...) Both Marks at first can't STAND each other but Mark #2 needs help with math and Mark #1 is the only kid smart enough to help him... so of course their teacher pairs them up as study partners. Mark #1 is NOT happy. Until he realizes he could use this to his advantage....

As mentioned above, once you get used to the idea of there being two Marks, the book can be read quickly at an enjoyable pace. All of the characters, including minor ones, were fun and I liked having them reappear throughout the novel. (Especially Mark #2's grandfather-he was adorable!) Although Mark #1 isn't the nicest kid in the beginning of the story, you start feeling a little sorry for him as you realize why he's so mean. Mark #2, the nice one, has many things that Mark#1 wishes that he had. Mark #2 just wants to do good in school (he was automatically placed into honors classes because the school thought he was the smart one)and enter his artwork into an upcoming art competition. The interaction between these two was very entertaining to read about (even at the beginning when they got off to a rocky start.) My only issues with this book was that I felt the ending was a bit rushed; I would've liked to have seen it drawn out a little further... as well as what was going on with Mark #1's father. But perhaps it was left the way it was since this book is geared more towards the younger readers. Other than that, I had fun reading The Trouble with Mark Hopper; the antics that go on within the book are great!

Note: Thanks to 1 ARC Tours and Elissa Brent Weissman for providing me with a copy!
Posted by Sandy at 2:51 PM