For Keeps by Natasha Friend 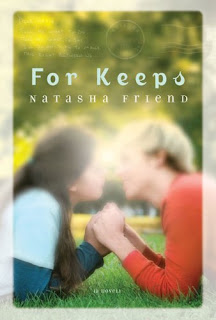 Synopsis: Josie’s never met her dad, and that’s fine with her. To Josie, Paul Tucci is just a guy who got her mom pregnant and then moved away. It all happened sixteen years ago, when Josie’s mom was still a teenager herself. But now Paul Tucci is back in town, and Josie has to deal with not one but two men in her life—her father and her first boyfriend, who Josie fears will hurt her just like Paul hurt her mother.

Josie's gotten along without her father for sixteen years and she's perfectly fine with how things are. She wouldn't dream of changing anything in her life-so you can imagine her surprise when she finds her usually calm and confident mother hiding in a grocery aisle, freaking out over who she's just seen. PAUL TUCCI'S PARENTS. As in, Josie's grandparents. Josie's mom is reduced to a nervous wreck and suddenly all those unanswered questions about her father start bubbling up to the surface. Sixteen years have gone by without a sign of Josie's dad and suddenly his parents are in town which raises the question: WHAT will Josie do now?

For Keeps had a great set of characters; their personalities were all nicely fleshed out and very believable. I loved the mother-daughter bond between Josie and her mother, Kate. Their relationship felt so genuine that I couldn't help feeling that it was a lot like the one I have with my own mother. I smiled whenever they had their moments ...and (here comes a mini-spoiler) fumed along with Josie when her mother started dating again. I know that if I were in Josie's shoes, I'd act the same exact way. (maybe even worse...) But I digress; Josie was extremely relatable in her feelings as a teenager despite her unusual circumstances. Her friendship with Liv, her wacky, stubborn and sometimes annoying best friend served as a more comical aspect to the story but there were times where I wanted to shake Liv since she stuck her nose in places where it didn't belong. As for Josie's romance, it was sweet and slightly predictable....although there was one instance where I thought she forgave Riggs (the boy) too quickly over something that I wouldn't have taken so nonchalantly. As for Josie's situation, it ends on a mostly good note; I just felt like things could've been stretched out a bit further-I was happy with how the story was spanning out but then it ends with a few loose ends. (and you know me, I'm not a fan of loose ends!) Overall, For Keeps was an enjoyable read with very few flaws; I'd recommend reading it if you want a cute story with serious undertones. It's almost like a literary version of The Gilmore Girls ;)