Swoon At Your Own Risk by Sydney Salter 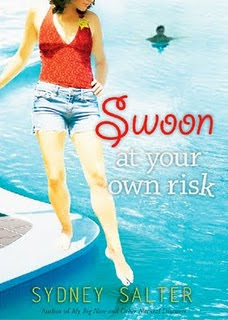 Synopsis:  You’d think Polly Martin would have all the answers when it comes to love—after all, her grandmother is the famous syndicated advice columnist Miss Swoon. But after a junior year full of dating disasters, Polly has sworn off boys. This summer, she’s going to focus on herself for once. So Polly is happy when she finds out Grandma is moving in—think of all the great advice she’ll get.

But Miss Swoon turns out to be a man-crazy sexagenarian! How can Polly stop herself from falling for Xander Cooper, the suddenly-hot skateboarder who keeps showing up while she’s working at Wild Waves water park, when Grandma is picking up guys at the bookstore and flirting with the dishwasher repairman? No advice column can prepare Polly for what happens when she goes on a group camping trip with three too many ex-boyfriends and the tempting Xander. Polly is forced to face her feelings and figure out if she can be in love—and still be herself.

Polly Martin is the queen of disastrous relationships--she's crashed and burned so many times that she's decided to take a break from dating and focus on herself. This would be easy to accomplish if she weren't constantly surrounded by her ex-boyfriends; throw Xander Cooper into the equation and Polly's head (and heart) are spinning! With his good looks and the mysterious ways, Polly's not too sure if she's safe from falling back into her old ways... but she's determined not to change herself for guys and won't, even if Xander Cooper makes her heart skip a beat.

Polly's narration had me laughing and smirking the entire time I was reading this book-her sarcastic wit, matched with a great sense of humor, easily made her an enjoyable protagonist and helped move the story along at an easy pace.  There were a lot of funny moments that happened at Polly's work place, Wild Waves, a western-themed water park where she had to deal with bratty kids, her co-worker Sonnet (an obsessive blogger with a penchant for tracking Polly's love life) and her latest ex-boyfriend, Sawyer. Polly's boy issues was the main focus of the novel and the reader doesn't get the answer to why Polly acts the way she does (joking around and never being serious) until the middle of the book. But I didn't mind waiting because Xander's character made the plot much more interesting. Xander, a skateboarder who writes poetry and makes multi-colored paper cranes for Polly whenever she was feeling down. Did I forget to mention he also willingly babysits his niece and nephew and looks great shirtless? ;)

Okay, so you didn't need to know that. (but really, he was awesome.)  He had a lot of wonderful qualities and his care-free personality meshed really well with Polly's sarcastic one. Xander opened Polly's tightly closed heart up and that's what made their relationship so touching. By the end of the book, Polly realized what her shortcomings were and fully resolved to improve them. Swoon At Your Own Risk was an endearing novel with an ending that will make you smile on the inside with how sweet it is.