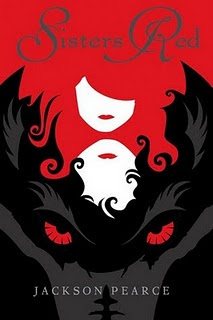 Synopsis: Scarlett March lives to hunt the Fenris-- the werewolves that took her eye when she was defending her sister Rosie from a brutal attack. Armed with a razor-sharp hatchet and blood-red cloak, Scarlett is an expert at luring and slaying the wolves. She's determined to protect other young girls from a grisly death, and her raging heart will not rest until every single wolf is dead. Rosie March once felt her bond with her sister was unbreakable. Owing Scarlett her life, Rosie hunts fiercely alongside her. Now Rosie dreams of a life beyond the wolves and finds herself drawn to Silas, a young woodsman who is deadly with an ax-- but loving him means betraying her sister and has the potential to destroy all they've worked for.

Both March sisters had the terrible luck of being attacked by a vicious Fenris but they dealt with the aftermath in different ways. Scarlett, the eldest of the two, lost her eye, her innocence and instead was left with an obsessive desire to seek revenge against the monsters that destroyed her and her sister’s lives. Rosie remembers that day with perfect clarity: she sees Scarlett risking her life to defend her and now she feels indebted to her older sister. So together they train and hunt to kill the Fenris so that no one else suffers the same fate that fell upon them. Scarlett is willing to dedicate herself completely to the hunt; Rosie, however, yearns for something more in life and when Silas, a handsome woodsman drops into their lives, Rosie thinks that she might’ve found what she’s looking for. But how can she possibly leave her sister when she owes her everything?

Before Sisters Red, I had never read any novels by Jackson Pearce so when I sat down to read this, I had no idea of how Pearce's writing style was or how I would react to it. But my worry vanished as soon as I read the prologue; the suspense in the beginning was the perfect way to start off this story and made me hungry for more. The chapters alternate between Rosie and Scarlett's point of view but since these two characters were nicely developed, it was easy to tell who was telling the story the moment you started a chapter. I loved how distinct their personalities were and yet they were able to compliment each other perfectly. Scarlett's determined and fierce attitude was the yin to Rosie's sweet and hopeful yang. The plot moved at a great pace, following not only their hunting adventures but also when they were allowed moments to act like the normal teenagers that they would've been if destiny hadn't intervened. Rosie's romance with Silas was sweet, unrushed, believable and it simply added to Rosie's transformation into the young woman she wanted to be. I can honestly say that I loved this book to pieces; I sighed at romantic moments, teared up during the bittersweet ones and smiled whenever Rosie and Scarlett referred to themselves as being the halves to one heart.

Sisters Red was a beautifully dark and gripping tale of two sisters who learn that although their paths were no longer the same, they would still be united with the same love and loyalty that binded them the day that fate stepped in, in the form of a wolf.

Cover comment: I usually reserve my comments for book covers when I feature them on my Waiting on Wednesday theme but man, this cover is amazing. It's not only imaginative and wonderful but it fits the story perfectly. Pffft, 5 stars all the way! ;)
Posted by Sandy at 9:14 PM