Mini-reviews: The Awakening & The Reckoning


If you had met me a few weeks ago, you probably would have described me as an average teenage girl—someone normal. Now my life has changed forever and I'm as far away from normal as it gets. A living science experiment—not only can I see ghosts, but I was genetically altered by a sinister organization called the Edison Group. What does that mean? For starters, I'm a teenage necromancer whose powers are out of control; I raise the dead without even trying. Trust me, that is not a power you want to have. Ever.

Now I'm running for my life with three of my supernatural friends—a charming sorcerer, a cynical werewolf, and a disgruntled witch—and we have to find someone who can help us before the Edison Group finds us first. Or die trying.

I loved The Summoning and I couldn't wait to get to the sequel. I can happily say that The Awakening is even better than its predecessor. The action, the drama, the romantic tension between Derek and Chloe (and yes, Simon) are all heightened and I zipped through this book in a matter of hours. NOTHING could have ripped me away from this book. Rating: 5 stars

Only two weeks ago, life was all too predictable. But that was before I saw my first ghost. Now, along with my supernatural friends Tori, Derek, and Simon, I’m on the run from the Edison Group, which genetically altered us as part of their sinister experiment. We’re hiding in a safe house that might not be as safe as it seems. We’ll be gone soon anyway, back to rescue those we’d left behind and to take out the Edison Group . . . or so we hope

Moments after finishing The Reckoning, I slowly closed the book, feeling a mixture of sadness, happiness and mostly disappointment. I noticed the amount of pages that the book had and was hoping that Armstrong would somehow magically resolve everything but unfortunately there were some plot points that never get touched upon or are mentioned and then ignored. Armstrong did throw some MAJOR curve balls in this last installment and I loved them but as I mentioned, they are never properly fleshed out. One thing I did immensely enjoy about The Reckoning was that there's FINALLY some action between Chloe and Derek. FINALLY. I got my sexy scenes! Woot! And Chloe finally grows a backbone in this last book (not that she wasn't brave before but she was very quiet. She's more vocal this time around). Rating: 3 stars 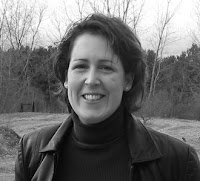 Final Verdict: After falling in love with the first two books, I was expecting an EPIC ending to one of my  favorite series. Alas, The Reckoning left me wrestling emotionally because while I was happy with how certain things wrapped up, Armstrong unleashed some new more plot lines that won't be properly answered since the series is over. My only hope is that those plot lines will be mentioned in her companion series; I hope Chloe and her crew make cameos :)
Clickables: Kelley's website, Kelley's Twitter, Kelley's Goodreads, Kelley's Amazon page
Posted by Sandy at 11:00 AM