Mini-reviews: Going Too Far & Forget You

HOW FAR WOULD YOU GO?

All Meg has ever wanted is to get away. Away from high school. Away from her backwater town. Away from her parents who seem determined to keep her imprisoned in their dead-end lives. But one crazy evening involving a dare and forbidden railroad tracks, she goes way too far...and almost doesn't make it back.

John made a choice to stay. To enforce the rules. To serve and protect. He has nothing but contempt for what he sees as childish rebellion, and he wants to teach Meg a lesson she won't soon forget. But Meg pushes him to the limit by questioning everything he learned at the police academy. And when he pushes back, demanding to know why she won't be tied down, they will drive each other to the edge -- and over....

How I wish I had read this sooner! Going Too Far was an electric story from start to finish: Meg and John After were like thunder and lightning-their personalities worked so well together but when one of them would anger the other person? Sparks literally flew off the pages! Meg challenged John's views of the world and John stirred something in Meg that she thought was buried forever. But there's more to GTF than the romace; Echols really gave depth to these characters--she used the stereotypical bad girl meets good cop story and wrote a fantastic story about love, loss and new beginnings. Seriously, read this! Rating: 4.5 Stars


WHY CAN’T YOU CHOOSE WHAT YOU FORGET . . . AND WHAT YOU REMEMBER?Did she go parking with Brandon, like she planned? And if so, why does it seem like Brandon is avoiding her? And why is Doug—of all people— suddenly acting as if something significant happened between the two of them? Zoey dimly remembers Doug pulling her from the wreck, but he keeps referring to what happened that night as if it was more, and it terrifies Zoey to admit how much is a blank to her. Controlled, meticulous Zoey is quickly losing her grip on the all-important details of her life—a life that seems strangely empty of Brandon, and strangely full of Doug. (Complete summary on Goodreads)

I did enjoy Forget You but I had an issue with Zoey's character; she annoyed me whenever she mentioned Brandon, her supposed "boyfriend."  Her constant affirmations that they were together grated on my nerves but I understood why she kept repeating herself. She's lost a huge chunk of memories, she's dealing with her mother's breakdown, her father publicly SHAMED the family (seriously, her father is a dirtbag!)... it's expected that she try to exert whatever control she has left of her life. Still, the constant "Brandon is my boyfriend" thing got a little old. But I will say that the scenes between her and Doug were HAWT. (hotter than the ones in GTF!) It's interesting, I found that Doug had more sex appeal than John After but I liked Meg much more than Zoey. Anyways... Forget You was very good although Zoey irked me sometimes.  Rating: 4 stars 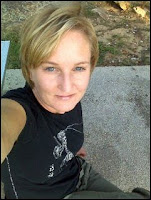 Final Verdict: If you haven't familiarized yourself with Jennifer Echols, you should do so immediately. She has that rare ability of enveloping you into her stories and her characters are so layered and realistic; I also greatly admire how her romantic scenes are so tastefully done--they capture the intense love and lust that all teens feel. I will no doubt continue to read her novels in the future. Miss Echols, you have a new fan! :D
Clickables: Jennifer's website, Jennifer's Twitter, Jennifer's Amazon page, Jennifer's Goodreads
Posted by Sandy at 9:39 AM