Grace Divine—daughter of the local pastor—always knew something terrible happened the night Daniel Kalbi disappeared and her brother Jude came home covered in his own blood.

Now that Daniel's returned, Grace must choose between her growing attraction to him and her loyalty to her brother.

As Grace gets closer to Daniel, she learns the truth about that mysterious night and how to save the ones she loves, but it might cost her the one thing she cherishes most: her soul.

I randomly picked The Dark Divine one day since I was having difficulty reading another book (I can't even remember the title of it) and I didn't expect to read it all in one sitting. I was planning on reading a few pages at most and there was a point where I couldn't stop reading and when I lifted my head up, it was dark outside. I had finished the book in all its entirety. I was all O__O because of the ending.

Grace might come off as bossy to some readers and okay, yeah, she can be but that's her way. I liked that she had a spine and that she wasn't willing to just sit there and take things as they came. She was also very rational and when she found out Daniel's secret, she reacts like anyone else would in the situation: she's afraid at first. I found this to be honest and rather refreshing since most heroines in paranormal YA don't show fear at first. And then there's Daniel Kalbi. Man, did I love his character. He's a bad boy but when Gracie's in the room, he's a total softie. He's always teased Gracie but you can tell that he's always cared about her in that special way. There's this history between them that goes back to their childhood and whenever Grace had flashbacks to when they were little, gah, they were just so sweet! (and there's some mention of art here and there: I LOVED that little detail). 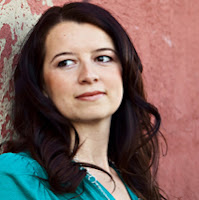 Final Verdict: The Dark Divine is a quick, great read that has some religious undertones but it's neither preachy nor overwhelming. (So no worries if that's something that irks you). Despain did something cool by drawing on some religious lore and combining the paranormal with it. She did it very well, I must say. Another character I think it worth mentioning is Jude, Grace's brother. He's got his own character arc that I'm intrigued to see play out--I have a feeling he'll be the prodigal son. *nods*