Thanks to The Teen {Book} Scene, I had the awesome opportunity to interview Leah Cypess, author of Mistwood and her latest novel, Nightspell. :)

Was Nightspell a planned novel waiting to be written after Mistwood or was it completely unexpected?

Actually, I started Nightspell before I started Mistwood. When I was in high school, I had an idea for a book set in a country where the dead come back to seek vengeance on their killers. I started writing that book, but lost steam and put it aside. Years later, while I was revising the final drafts of Mistwood, I went back to that idea and started writing it again.

Nightspell’s set in the same world as Mistwood so I was wondering…will Isabel or Rokan make a guest appearance? ;)
Sorry, but no! We do get to see a portrait of them... I don’t think that counts, though. (It counts! I was happy when I caught that reference.)


I noticed that the theme of siblings/family loyalty show up in both your books; while writing each story, were you consciously aware of this or did this particular theme just come into the stories on its own?

I knew from the beginning that Nightspell was going to be about sibling relationships, though I didn’t know exactly how it would play out. With Mistwood, the siblings aspect wasn’t planned – it found its way into the story as I was writing it.

Darri, the protagonist, must travel to a place called Ghostland where the living and dead exist together (and are completely aware of each other). This sounds adventurous but I would probably be unnerved if I ran into a ghost (especially if it’s the ghost of a murderer!). If you had to have an encounter with any type of ghost—whose ghost would you want it to be and why?

I would be a complete coward if I met a real ghost, and I would prefer for it to be a friendly Casper-type ghost who was as non-scary as possible! As for who, there are a lot of historical figures I’d like to chat with and get to know better. Plus, think of all the historical mysteries I could solve! (Assuming the ghosts would tell the truth. Hmm…) That said, I think the person I’d most like to talk to would be my grandfather, who died when I was two years old.

Darri and Isabel both seem to share the quality of being headstrong young women: would you say that you have that in common with your characters? :)

My parents and teachers would definitely say that. Myself, I prefer the term “determined.”

Last but certainly not least: are you working on any other projects?
Like another book set in the same world as Mistwood, perhaps? (YES PLEASE.) The book I’m working on now is set in the same world as Mistwood and Nightspell, but several hundred years after the events in those books. It’s about a sorceress sent to be the magic tutor for a mysterious sect of assassins. (Assassins=auto-win for me.) 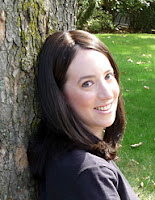 Thank you, Leah, for taking the time to answer my questions! I hope my readers enjoyed the interview and will hopefully pick up Leah's books in the future! Leah has a lovely writing style. I'm very intrigued about the story with assassins....