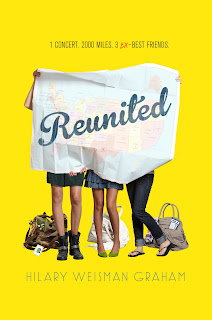 Back in middle school, the three girls were inseparable. They were also the number one fans of the rock band Level3.

But when the band broke up, so did their friendship. Summer ran with the popular crowd, Tiernan was a rebellious wild-child, and Alice spent high school with her nose buried in books.

Now, just as the girls are about to graduate, Level3 announces a one-time-only reunion show.

Even though the concert’s 2000 miles away, Alice buys three tickets on impulse. And as it turns out, Summer and Tiernan have their own reasons for wanting to get out of town. Good thing Alice’s graduation gift (a pea-green 1976 VW camper van know as the Pea Pod) is just the vehicle to get them there.

But on the long drive cross-country, the girls hit more than a few bumps in the road. Will their friendship get an encore or is the show really over?

Doesn't Reunited sound so good? And that cover is so fantastic! I love how bright and cheerful the cover looks and that map is pretty cool. I also really love that bag over on the left...I'm assuming that's Tiernan's?
Posted by Sandy at 8:00 AM