Synopsis: Carly has dropped out of uni to spend her days surfing and her nights working as a cook in a Manly café. Surfing is the one thing she loves doing … and the only thing that helps her stop thinking about what happened two years ago at schoolies week.

And then Carly meets Ryan, a local at the break, fresh out of jail. When Ryan learns the truth, Carly has to decide. Will she let the past bury her? Or can she let go of her anger and shame, and find the courage to be happy?

Raw Blue was brilliantly written--Eagar's writing style reminded me very much of the waves that Carly surfed. There are moments of tranquil beauty where you just wanted to sit and absorb the words on the page but Eagar could just as easily throw you aside and drown you in Carly's pain. Carly was a complicated protagonist, and chapter after chapter Eagar peels back layers so the reader could glimpse into her personality. That was a treat for me, as well as the lovely prose the author clearly possesses. I also must admit how refreshing it was to see that daily life CAN be described in such a way that it's not always so boring. And the surfing scenes? Awesome, awesome, awesome. It made me want to try surfing despite my intense fear of getting ravaged by sharks in the water*.

I also think Eagar handled Carly's relationship with Ryan in a completely realistic way. There were misunderstandings, doubts, and fears between these two but Ryan had an important role in Carly's healing. He was such a caring, patient guy :) I do wish that some of the secondary characters could've been explored more however. I was fascinated with Danny and his synthanesia--he really brought some flair into the story and he deserves a book entirely dedicated to his story in my opinion! 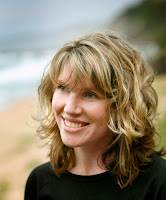 Final Verdict: I really enjoyed Raw Blue. It had all the qualities of a great read and I admired the way Eagar wrote about Carly's emotional path with respect and empathy. I also think that Raw Blue is a perfect example of how you can write about sex in YA but doing so in a tasteful and appropriate way that adds to the overall story. And I sort of liked how the story ended right when another story was about to begin (although I will admit that that annoyed me initially because I wanted more time with Carly!)

A thousand thank-yous to Holly for letting me participate in her tour!

*I know that sharks don't usually attack humans, I KNOW that. But it's still not comforting that their jaws can UNHINGE FROM THEIR SKULL. *shudders*
Posted by Sandy at 4:18 AM