Shadow and Bone by Leigh Bardugo

Surrounded by enemies, the once-great nation of Ravka has been torn in two by the Shadow Fold, a swath of near impenetrable darkness crawling with monsters who feast on human flesh. Now its fate may rest on the shoulders of one lonely refugee.

Alina Starkov has never been good at anything. But when her regiment is attacked on the Fold and her best friend is brutally injured, Alina reveals a dormant power that saves his life—a power that could be the key to setting her war-ravaged country free. Wrenched from everything she knows, Alina is whisked away to the royal court to be trained as a member of the Grisha, the magical elite led by the mysterious Darkling.

Yet nothing in this lavish world is what it seems. With darkness looming and an entire kingdom depending on her untamed power, Alina will have to confront the secrets of the Grisha…and the secrets of her heart.

Review: I have nothing bad to say about this book. No really, absolutely NO COMPLAINTS...I can't even come up with something because I unabashedly adored this book and I must be in possession of a finished copy STAT*.

Alina Starkov, I love you. For your badass ways and that you pick yourself up after you fall...which is a lot of times. Her character development from the beginning all the way to the ending (that ending!) was something to behold; she was a stronger, wiser version of herself and it was quite the journey for her (and this reader) to get there. I even teared up at one point. Actually, just thinking about certain parts of the book have made me choke up even after I finished reading it.

The Russian culture that served as a model for the world that Bardugo creates in Ravka is skillfully written and felt tangible throughout the story; I also appreciated the linguistic aspect of the story that the author provided with the Ravkan language--it's very cool to read about. The characters in this story were also well-done: all the major players of the story to the secondary characters were  developed and I never found myself bored with any of them. Even the minor characters added suspense and drama to Alina's tale of darkness and light. Oh, and don't even get me started on The Darkling. That is one hell of a character--he walks the tightrope between scary and awesome. 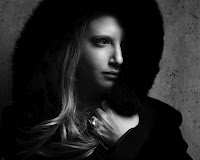 Final Verdict: The finely crafted world of Ravka, the stunning cast of characters (The DARKLING! Oh mai), the heartfelt romance and the heart-pounding adventure and fear make Shadow and Bone an absolute must-read for fantasy readers! I feel incredibly lucky that this book happened to land in my mailbox all those months ago; the beautiful writing and the prickly but still endearing main character are worth reading about if you're still not convinced.

*I ended up buying a finished copy when I stepped into a Barnes & Noble the other day. I keep looking at it on my shelf because it's so much prettier in person and THAT COVER WOW. I love running my fingers over the raised font. Ok. I sound weird. I'll stop now.
Posted by Sandy at 1:30 PM