Deuce’s whole world has changed. Down below, she was considered an adult. Now, topside in a town called Salvation, she’s a brat in need of training in the eyes of the townsfolk. She doesn’t fit in with the other girls: Deuce only knows how to fight.

To make matters worse, her Hunter partner, Fade, keeps Deuce at a distance. Her feelings for Fade haven’t changed, but he seems not to want her around anymore. Confused and lonely, she starts looking for a way out.

Deuce signs up to serve in the summer patrols—those who make sure the planters can work the fields without danger. It should be routine, but things have been changing on the surface, just as they did below ground. The Freaks have grown smarter. They’re watching. Waiting. Planning. The monsters don’t intend to let Salvation survive, and it may take a girl like Deuce to turn back the tide.

Review: Though different in tone and scope from its predecessor, Outpost shows that Ann Aguirre hasn't lost her touch. In fact, she's only gotten better!

What struck me almost instantly was how different Deuce's situation is in comparison to where we first meet her in Enclave. No longer having to constantly fight off hordes of Freaks at every turn, Deuce and the rest of her gang can finally put down their weapons and have a chance to simply be. But the peace doesn't last long.  Now that she's in Salvation, Deuce struggles to adapt to what's considered "normal" topside and must contend with the scrutiny of the town. I thought this was a good twist to Deuce's journey: she's not in any immediate physical danger but now she has to navigate a territory she's completely unfamiliar with: people. Deuce is a hunter through and through and sees things in black and white; any problem she's had she's always dealt with by whipping out her blades and literally attacking it but she can't do that with the people of Salvation.

I like that Outpost is more about Deuce opening herself up to the idea that she can be more than just a Huntress. The Freaks, Fade, and everything else are still important factors in the overall story but I like that Aguirre had her main character become more susceptible to the human condition. Fade helped her by giving her a glimpse of what life could be in Enclave, of course, but Deuce's time and experiences with her friends and foster family in Salvation broadened her horizen to an entirely different level. The same thing goes for Stalker, another character that's similar in personality to Deuce. He's definetely more likeable this time around and I suspect this is intentional on the author's part. I hope Stalker gets his happily-ever-after because he definetely deserves it.

And Fade. Sigh. Things get so sweet and then Aguirre had to go and make things terribly grim again. Way to wring my heart out, miss author.  Things were complicated enough and now they're inside out all over again T-T Along with the suspense and danger that's almost like a heartbeat in this series, Fade and Deuce's relationship is another facet of this story that undergoes change time and time again. It's not always pretty but oh so well done. The feels, I tell you. 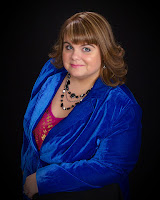 Final Verdict: Outpost is very different from the first book but in an important way. It's good that Outpost was more about Deuce exploring and reflecting about her own humanity; she finally sees herself and a future where she can step outside of her identity as a Huntress and just be Deuce, the girl. As for Ann Aguirre's writing abilities, there's no doubt that she's on her game. I can't wait for the final book and YAY it's already 2013 so my wait is a little less.