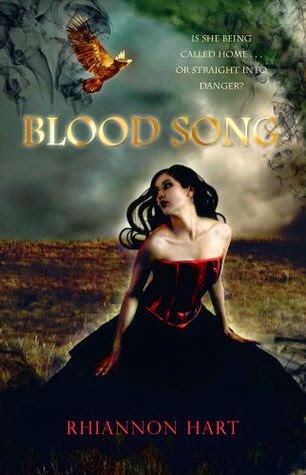 Synopsis: When her sister becomes betrothed to a prince in a northern nation, Zeraphina’s only consolations are that her loyal animal companions are by her side – and that her burning hunger to travel north is finally being sated.
Already her black hair and pale eyes mark her out as different, but now Zeraphina must be even more careful to keep her secret safe. Craving blood is not considered normal behaviour for anyone, let alone a princess. So when the king’s advisor, Rodden, seems to know more about her condition than she does, Zeraphina is determined to find out more.
Zeraphina must be willing to sacrifice everything if she’s to uncover the truth – but what if the truth is beyond her worst nightmares?

Review: I haven't really dipped my toes much into Aussie YA (with the exception of these two contemporaries) so when I saw that this was available on Amazon for a reasonable price, I immediately clicked to purchase Bloodsong.

Zeraphina is the younger princess of Amentia, a queendom that has been crumbling over the last few years. It is up to her older sister, Lilith, to save their home by traveling to a northern kingdom to marry a prince that she has never met. This actually makes Zeraphina very happy because now she has an excuse to travel to the North, an excuse to figure out finally why she feels this pull to travel northward along with her inexplicable craving for blood. I liked Zeraphina and her feisty nature. She was funny, brave and has a hell of a talent for archery. I even liked that her reasons for traveling to the north were selfish, and that she admitted that she was selfish. It takes someone with a lot of insight to realize and then admit to that. My only problem with her character is that sometimes she was so bent on believing the worst in people (*coughRODDENcough*) that she didn't stop to think things through. She was right to be suspicious of things but she kept blindly assuming things (even when presented with evidence that contradicted her initial beliefs) without taking a moment to reconsider the other side of the coin.

As for Rodden, I liked his character and I liked him with Zeraphina but I was rather confused at times with how they saw each other. They instantly dislike each other on sight but have moments where they'd let their guard down and flirt. These two have a nice banter between them but it would go from I DISLIKE YOU to OH YOU ARE CUTE HM and then towards the end they're in this dangerous situation which yes, takes precedence over their flirtation but they slip into this friendship mode and firmly stay there. Their relationship puzzled me at times because they would bicker like a married couple (which is adorable) but then Zeraphina would remember that oh no, HE IS THE ENEMY. It seemed odd to me how they switched on and off but I will say that their relationship is fascinating in that despite how pissed off they are with each other, they'll have each others' backs. And that's what kept me rooting for them.

I had a few issues with the world building however: there was enough for me to understand the landscape of both Amentia and Pergamia (the northern province) but I felt like it was very basic. For example, it is cold and gloomy in Amentia but hot and summery in Pergamia. Zeraphina & co. wore heavy clothes back home while in Pergamia they must wear airy togas, etc. Granted, there are seasons in this world but I was hoping for the details between these two nations to be more fleshed out, and I was also waiting to read about cultural differences between both nations. I didn't get much of that in this installment but I'm hopeful that the next two novels will be more informative. Also, I couldn't help but wonder whenever the characters would talk to each other and they'd end their sentences with 'hey.' That stood out since supposedly the setting is a medieval-type of fantasy right? Or maybe it's some sort of Australian slang that happened to seep into the story?*

Don't get me wrong, I still enjoyed Bloodsong despite some of my criticisms. It's a fun read and there are some elements in this world that are very original. The concept of Lharmell and Lharmellins (the bad guys of the story)? Brilliant! The reason for Zeraphina's bloodlust is actually very interesting and NO she is not a vampire. THAT is utterly refreshing. There is also an intriguing reason that Rodden let slip about why Lilith was able to marry the northern prince--and it has to do with Lharmell. I really appreciated that scene because it gave me some more insight into the world. Also Zeraphina's furry and feathered companions, Leap and Griffin, are brilliant and stole the show whenever they were on the page. I don't even LIKE cats but I would want a Leap :) Such cuties ♥ 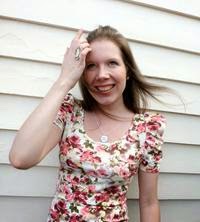 Final Verdict: I had high hopes and while they weren't entirely met, I still enjoyed this debut enough where I want to continue with the series--and read the prequel novella that's available from Rodden's POV. However, I do think that Rhiannon Hart wins a million brownie points for coming up with an original twist to why Zeraphina has an innate bloodlust along with the political-economic side of the two provinces uniting. I can't wait to read more of Zeraphina's story to see where it leads :)

*I hope that's not a dumb comment. I know little to nothing about Australia or how they talk. :S Forgive me if that's a silly question.
Posted by Sandy at 7:30 AM