Interview & Giveaway with Kat Ross, author of SOME FINE DAY

Whew! It's been a while since an interview has happened around these parts. Kat happily remedied this by reaching out to me and inviting me to participate in her blog tour for her debut novel. So I'm happy and proud to have her as a guest on the blog today. Give a virtual round of applause to Kat Ross, author of SOME FINE DAY.

If you had to explain SOME FINE DAY in ten words or less, how would you describe it?
Oh, this is hard! Here goes:
Girl gets kidnapped, meets boy, saves boy, ends up in…[insert spoiler here]

SOME FINE DAY is your debut novel (which recently released-congrats btw!). How did you celebrate on your release date? :D
Sipping lemonade on the beach in the Florida Keys! I'd booked the trip before I knew my release date, but I tend to be an introvert, so I was actually kind of relieved I didn't have to throw a big party (:  (Lucky....I'd give anything to escape this arctic winter we've been having.)

When I looked into your debut, I read about hypercanes…which sound legit scary. How did you discover hypercanes? What is it about them that caught your interest?
I was researching extreme climate change scenarios and that word just caught my eye. They're a (still theoretical, thank God) class of mega-storm predicted by Kerry Emanuel at MIT, and yes, they are legit scary! I thought I'd have to make something like that up, so I was delighted to discover that under particular conditions, they could actually exist in the real world. We're talking storms the size of continents, with wind speeds in the many hundreds of miles per hour. And then I thought, what if there was more than one? And they never went away, like the Great Red Spot on Jupiter? Things would get ugly in a hurry.

What was your process for writing SOME FINE DAY? It seems like you’d have to do a lot of research just to write about hypercanes.
I really enjoyed that part of it. One of the biggest challenges was figuring out how people could survive so deep underground. Where would the air come from? The water? What would they eat? How would they travel and communicate? And conversely, how would you survive on the surface under such hostile conditions? I tend to get obsessive about accuracy. There a scene in the sequel (still unfinished) where the main character, Jansin, has to climb out of one of the ventilation tubes, and I actually spent hours digging out biomechanics studies about the maximum speed a human can climb a ladder (it's something like three feet per second).  (O_O!!!!)

Having gone through the process of publication (and knowing what you know now), what advice would you give to your past self?
Be in it for the long haul. Don't let the bumps in the road derail you. Just keep writing, and write what you want to, not what you think will sell. This is supposed to be fun, after all.

If you could live in any fictional world, what would you choose and why?
Maybe the alt-world London of Jonathan Stroud's amazing Bartimaeus trilogy—but only if I had my own personal djinn. (Did you hear that thunk? It was the sound of more books being added to my TBR pile.)

What are some awesome books you’ve read lately? YA or otherwise!
I adored Grasshopper Jungle by Andrew Smith. He's just brilliant on every level, and does the best genre mash-ups. Also Code Name Verity by Elizabeth Wein, and Night Film by Marissa Pessl. Now I'm reading Feed by M.T. Anderson, which isn't new, but has one of the best first lines: "We went to the moon to have fun, but the moon turned out to completely suck."

Are there any characters from different novels that you’ve read that you think would make a cute couple? Hehe. Or maybe a character of yours paired up with another book’s character?
I could totally see Jansin having a major girl-crush on Amy Gumm from the Dorothy Must Die series.

Do you have any fictional crushes? ;)
Team Gale, all the way. (THANK YOU. I totes agree.)

What “buzz words” or phrases in book descriptions make you pick something up? Modern retellings, spies, forbidden romance….? There are so many options. :D
Gothic, eerie, darkly funny, time travel, myths with a twist, bad-ass girls…

And now.... Lightning round!

Synopsis: A generation ago, continent-sized storms called hypercanes caused the Earth to flood. The survivors were forced to retreat deep underground and build a new society. This is the story that sixteen-year-old Jansin Nordqvist has heard all of her life.

Jansin grew up in a civilization far below the Earth’s surface. She’s spent the last eight years in military intelligence training. So when her parents surprise her with a coveted yet treacherous trip above ground, she’s prepared for anything. She’s especially thrilled to feel the fresh air, see the sun, and view the wide-open skies and the ocean for herself.

But when raiders attack Jansin’s camp and take her prisoner, she is forced to question everything she’s been taught. What do her captors want? How will she get back underground? And if she ever does, will she want to stay after learning the truth 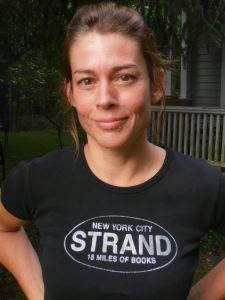 Kat Ross was born and raised in New York City and worked several jobs before turning to journalism and creative writing. An avid traveler and adventurer, she now lives with her family—along with a beagle, a ginger cat, and six fish—far enough outside the city that skunks and deer wander through her backyard.

We hope you've enjoyed the interview! Kat is being super generous and hosting a giveaway with amazing prizes! The grand prize is a Kindle Paperwhite with a custom cover, preloaded with SOME FINE DAY while the other two winners will receive a signed copy of Kat's novel and a CD audiobook. Best of all, THIS IS INTERNATIONAL. So jump on it, friends!

Note: all images and GIFs were found via search engines. I've credited them as best as I can. Just to be clear--none of these belong to me.