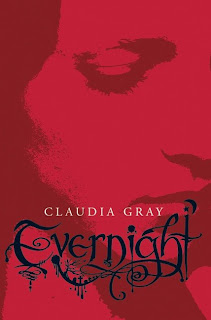 Synopsis: Bianca wants to escape. She's been uprooted from her small hometown and enrolled at Evernight Academy, an eerie Gothic boarding school where the students are somehow too perfect: smart, sleek, and almost predatory. Bianca knows she doesn't fit in. Then she meets Lucas. He's not the "Evernight type" either, and he likes it that way. Lucas ignores the rules, stands up to the snobs, and warns Bianca to be careful—even when it comes to caring about him. "I couldn't stand it if they took it out on you," he tells Bianca, "and eventually they would." But the connection between Bianca and Lucas can't be denied. Bianca will risk anything to be with Lucas, but dark secrets are fated to tear them apart . . . and to make Bianca question everything she's ever believed.

I was worried if this book was going to be good or not. I almost didn't buy it but I thought, why not give it a try? And I'm glad I did! I was worried that it was going to be the typical plot: girl meets boy, boy has secret and wants to be with her but acts like a jerk because he doesn't want her to get hurt (Edward Cullen anyone?).... but it turned out to be so much more. Bianca is a shy loner who would rather hang out with her parents listening to old records than party with kids her own age. She's kicked out of her comfort zone once she's plucked from her hometown and thrown into the slippery world of Evernight. No one at the school makes her feel welcome and she has trouble adjusting to the situation, despite her parents telling her it's for the best. She's completely miserable...until Lucas steps in.

I was hooked by the first chapter. After an (awkward!) first meeting, Bianca is smitten with Lucas. They bond over their mutual dislike of Evernight and this quickly develops into a romance which proves to be difficult to maintain. Outside pressures threaten to destroy their relationship, but Bianca and Lucas refuse to break away from each other.