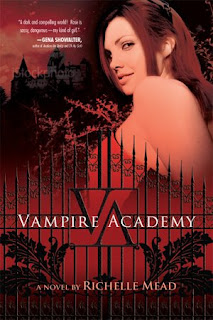 
Synopsis: St. Vladimir's Academy isn't just any boarding school—it's a hidden place where vampires are educated in the ways of magic and half-human teens train to protect them. Rose Hathaway is a Dhampir, a bodyguard for her best friend Lissa, a Moroi Vampire Princess. They've been on the run, but now they're being dragged back to St. Vladimir's—the very place where they're most in danger. . . .
Rose and Lissa become enmeshed in forbidden romance, the Academy's ruthless social scene, and unspeakable nighttime rituals. But they must be careful lest the Strigoi—the world's fiercest and most dangerous vampires—make Lissa one of them forever.

When my friend Em told me that I had to read this, I was skeptical... I took one look at the cover and thought it looked cheesy. (I admit that I can be a cover snob.) But I decided to look into it, especially since she was so insistent. By the time I finished the book, I wanted to hunt her down to give me the next two books in the series. I couldn't get the story out of my head. I NEEDED to know more. Maybe the book was laced with cocaine or something...either way I ate this book up. :) Since vampire fiction ("bit lite") is so popular these days, I was wondering if this novel was going to live up to my expectations. But as I quickly found out, Vampire Academy is a revelation that I was happy to discover. What struck me as unique was that Richelle Mead blended Romanian mythology and her own ideas to create the world of Vampire Academy. Rose Hathaway was a character that I liked almost immediately. Her sweet sounding-name doesn't describe her at all. She was fiery smart-ass with a mischievious streak that I enjoyed reading about. But the best part was seeing how loyal she was to Lissa. Nothing could break them apart. Their friendship and pyschic connection to each other made them inseperable. Rose wasn't just Lissa's bodyguard: they were sisters of the heart. As for the cover...by the time I finished the book, I ended up liking the cover a lot! I guess it kinda grew on me. The girl (who's supposed to be Rose) kind of looks like Angelina Jolie, I think. Which is good since Rose is supposedly a dark beauty. Annnd I forgot to mention that what I also really reallyyy liked was the relationship that unfolds between Dimitri and Rose. I don't want to give much of it away.... but I will say that sparks fly. Oh, they flyyyy.