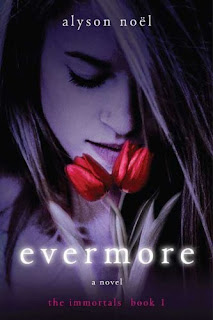 Synopsis: Since a horrible accident claimed the lives of her family, Ever can see auras, hear people's thoughts, and know a person's entire life story by touch. Going out of her way to avoid human contact and suppress her abilities has branded her as a freak at her new high school—but everything changes when she meets Damen. Damen Auguste is gorgeous, exotic and wealthy. He's the only one who can silence the noise and random energy in her head—wielding a magic so intense, it's as though he can see straight into her soul. As Ever is drawn deeper into his enticing world of secrets and mystery, she's left with more questions than answers. She has no idea just who he really is—or what he is. The only thing she knows to be true is she's falling deeply and helplessly in love with him.

This wasn’t my first time reading Alyson Noel’s work; a while ago I read her book Art Geeks & Prom Queens. I kinda liked it, so I was expecting Evermore to be similiar to it. Luckily though, I was wrong. Evermore was entertaining and had me devouring it whenever I had the chance to sit down. What made me need to read it was my burning curiousity towards Damen-why was he so damn perfect?! Ever immediately liked him, and I could see why. He was handsome (beyond belief, apparently), intelligent, artistic, mysterious and extremely charming. (My favorite talent that he had was his cooking skills! Make me pancakes, Damen!)
I was so so so curious to know the reason why he would always place himself in her path and just as quickly disappear. As for Ever... (such a cool name!) I loved her character. She was natural, honest and reacted to her tragedy in a realistic way. Her survivor’s guilt was so tangible that you never forgot for a second the sadness she had for her family. Her guilt, coupled with newly acquired psychic powers that she didn’t want at all, only made her life more difficult to live. (I mean, if you bump into someone and learn their entire life story through that brief contact, it’d be sensory overload, don’tcha think?)

The bulk of the novel is essentially the cat and mouse game that Ever gets sucked into with Damen. He is charismatic and for some reason, Ever’s psychic awareness of the world is silenced by his touch. That alone is enough to make Ever gravitate towards him. The minor characters were okay; her two best friends Miles and Haven were...iffy. I liked Miles but I felt he should’ve been around more. Haven....don’t get me started; I just did not like her flightly, volatile attitude. Especially towards Ever. The minor character that piqued my interest the most was Ever’s aunt; after her family is killed, Ever’s sent to live with her father’s twin sister; both women had a turning point when they each expressed their grief to each other. After reading that, I’d like to see their relationship evolve more in the next book. My impression of Evermore was that it was going to be okay. I didn't expect how addictive it turned out to be. So if you see this in any book store, library....anyplace they sell books!, I command you to get it. You won't be disappointed.
rating: 4.0
Posted by Sandy at 7:22 PM