Map of the Known World by Lisa Ann Sandell 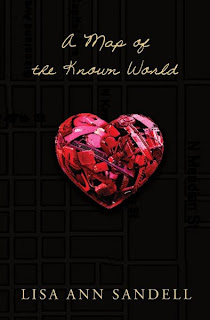 Synopsis: Cora Bradley dreams of escape. Ever since her reckless older brother, Nate, died in a car crash, Cora has felt suffocated by her small town and high school. She seeks solace in drawing beautiful maps, envisioning herself in exotic locales. When Cora begins to fall for Damian, the handsome, brooding boy who was in the car with Nate the night he died, she uncovers her brother's secret artistic life and realizes she had more in common with him than she ever imagined. With stunning lyricism, Sandell weaves a tale of one girl's journey through the redemptive powers of art, friendship, and love.

Almost a year has passed since Nate's death and the Bradley family hasn't recovered. Cora's father has distanced himself emotionally from his wife and daughter, preferring the company of alcohol. Cora's mother, fearful of losing her daughter, keeps Cora in place with inflexible and unreasonable rules. As for Cora? She is tagged as "the girl who's brother died" and feels uncomfortable, knowing that everyone expects her to either fall apart or that she'll continue Nate's tradition of being reckless. her only form of release is through the maps she creates, letting her mind wander where her mother's rules don't apply. Once she starts high school, she finds herself growing apart from her best friend Rachel, whose worries consist of being popular and getting boys to like her. Cora hopelessly feels like an outsider until she reaches her art class and finds herself face to face with Damian, Nate's best friend (who also happened to be in the car the night Nate died). Soon the two become friends and Damian shows Cora a side of Nate that no one ever knew about-that he was an artist, like Cora. Together, they reminisce about Nate and face the truth of the past.

This is my first time reading one of Lisa's books and I found that I wasn't disappointed. My favorite aspect of this book was how lyrical her writing was; it was fluid, flowing like the ink that Cora used in her maps. Another aspect I'd like to point out was that I found how Cora and her parents reacted was very realistic. Everyone expresses grief in different ways, and the Bradley household was no different. Cora's parents tortured themselves with the past; there was one scene that really highlights this, when Cora finds her father crying over a box of Nate's old things and when Cora's mom finds out, they wrestle over the box, both parents clashing over how to remember the son they lost. Cora is torn, knowing her parents are sad but can't help but feel anger that they won't let her live her life and pursue her dreams. She finds a kindred spirit in Damian, and she begins to fall for him (knowing full well she shouldn't). The only thing I found a little annoying was how much Damian blamed himself for Nate's death. His anger at himself for being reckless and guilt for losing Nate would sometimes spill over into his relationship with Cora, and he'd snap at her or distance himself a little (for her benefit since being associated with him was, in his mind, a bad idea) I wanted to slap him whenever he fell into one of those moods. Otherwise he was very sweet, supporting Cora in exploring her talent and tried steering her in the right direction. Cora's friendship with her childhood best friend also evolves: both girls are pulled in different directions and Cora can't believe that Rachel has changed so much in just one summer. The two fight and eventually become friends again, but acknowledge that their interests are no longer in sync. But that's ok, since Cora finds a new friend (who I loved reading about!). So before I keep repeating myself in this review, I'd like to say that I thought Map of the Known World was a great portrayal of what it's like to lose someone, deal with the pain and manage to become stronger because of it (and make great art along the way). Why does it seem that sadness and art go so well together?