(First ever!) Interview with Julie Kagawa, author of The Iron King! 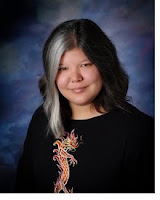 I am excited today to welcome Julie Kagawa, author of the upcoming novel The Iron King which will be available on February 1st 2010! She was kind enough to allow me to interview her despite her hectic scheduele. You can find out more about her through her main site. (read her bio, it's very entertaining!)Or if you have twitter, you can tweet her. She's really nice! Anyways, I'll stop babbling. :) On with the interview!


What made you decide to become a writer?
The fact that I would have to study copious amounts of science and math to become a veterinarian, which was my first career choice when I was younger, and numbers have always had it in for me. That and the voices in my head wouldn’t shut up. ;-)

For those that aren’t familiar with your novel, could you tell them what it’s about?

The Iron King is about a girl named Meghan Chase who, on her sixteenth birthday, discovers her kid brother has been kidnapped by Faeries and a changeling is left in his place. When she goes into Faeryland to get him back, she finds that her brother wasn’t taken by the Unseelie Court, as she first thought, but by a whole new species of faery led by Machina, The Iron King. These are the faeries of progress and technology, the iron fey, and Meghan must face The Iron King if she wants to rescue her brother.

Is there anything different about The Iron King that might set it apart from other faerie books?
The Iron Fey are very different than traditional faeries. Not to be spoilerish, but I hope they will give a new spin on an old mythology.

What is it about faeries that capture your interest so much?
I like all paranormal creatures, but faeries are mischievous, capricious, dangerous, romantic, beautiful and terrifying. That, and I find it intriguing that they could be all around us, unseen and invisible, and you would never know.

Your book is due to be released next month! How excited are you right now?
Sorry, I couldn’t hear you over the squealing and the dancing. :D

How long did it take you to write your book and what was the most difficult/easiest part of writing it?
The Iron King took me a little under two months to write, mainly due to NaNo WriMo, which is to write 50,000 words in a month. I was already halfway into the story when I started NaNo, so set my own 50,000 word deadline and typed like a madwoman until it was done. The hardest part of writing, for me at least, is tuning out the distractions long enough to get my word quota on the page. The internet has become the bane of my writing life as late, so much so I’ve actually had to work with it unplugged if I want to get anything done. Easiest? Probably the rewriting. The words are already on the page; I just have to tidy them up a bit.

Are there any characters that you like a teensy bit more than the others?
I would have to say that Ash, the prince of the Unseelie Court, is my favorite character. But a smart-ass talking cat named Grimalkin is very close behind.

How did you find and then become part of The Tenners? I’ve always wondered how these groups are created. I believe I was on another forum when I heard of them, so I popped on over to see what they were about. Best decision of my career, I think. I’m honored to be a part of the Tenners. They’ve been fabulous.

It says in your bio that before you became a full-time writer, you were a professional dog trainer. Have any of those experiences made their way into your books?
Lol, not yet. Perhaps I’ll write a book about it, someday, but as of now my writing schedule is consumed with faeries. I will say that fellow Tenner Josh Berk kept asking me how I would train a dog to steal cars. o_O Not sure what he’s going to do with THAT information, lol.

I know that The Iron King is part of a trilogy and that you’re working on the final book. Do you have any other projects after this series is finished?
I do have another project planned, but its kinda secret right now. But I plan to keep writing for as long as my fingers work, so hopefully there will always be upcoming projects.

Would you ever consider writing outside of the YA genre?
Maybe. But I’d always come back to YA I think.

If you could live in any fictional book world, which book would you choose and why? :)
Harry Potter, so I could wave my wand and have the computer type the story for me.

I hope you guys enjoyed the interview! It was my very first one and Julie made it a lot more fun! Thanks to Julie for allowing me to interview her! And keep an eye out for The Iron King everyone! February is right around the corner :)
Posted by Sandy at 1:35 PM