Give Up The Ghost by Megan Crewe 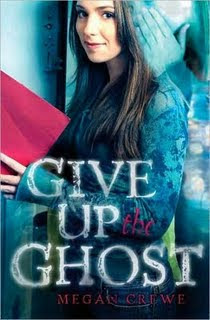 Synopsis: Cass McKenna much prefers ghosts over “breathers.” Ghosts are uncomplicated and dependable, and they know the dirt on everybody…and Cass loves dirt. She’s on a mission to expose the dirty secrets of the poseurs in her school.

But when the vice president of the student council discovers her secret, Cass’s whole scheme hangs in the balance. Tim wants her to help him contact his recently deceased mother, and Cass reluctantly agrees.
As Cass becomes increasingly entwined in Tim’s life, she’s surprised to realize he’s not so bad—and he needs help more desperately than anyone else suspects. Maybe it’s time to give the living another chance….

Give Up The Ghost was an intriguing story that proved to be very refreshing with a main character who dealt with issues that didn't revolve around romance; instead Cass had to learn how to open herself up emotionally to the living and realize that she couldn't always count on ghosts to be there for her. The growing friendship between Cass and Tim was realistic in its pace and best of all, it stayed strictly within the realm of friendship. I feel like so many novels give us a female protagonist that starts out single, meets a boy and quickly the two are attracted to each other. This is a rather predictable formula so it was nice to see Megan Crewe not go down that route with Cass and Tim. (hence the refreshing aspect to this novel) However, I felt like the author could've explained a few things better. There were a few loose ends to the story and sometimes I don't like having to guess what happens-sometimes I want the author to tell me what happened and why. I also would've liked to see more of Cass' ghostly friends since they were mentioned fleetingly (when they did show up, they were very fun and quirky!) I wanted to know more about their past lives and not rely on only what Cass would tell the reader. The hopeful ending made me feel a little bit better but I honestly wanted a little more from the novel. It just didn't have everything nicely constructed the way I usually like as a reader. But that's just my opinion.