Queen of Secrets by Jenny Meyerhoff 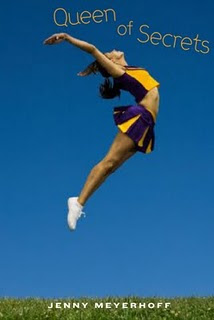 Synopsis: This year Essie Green’s life is going to be different. She’s made the cheerleading squad and caught the eye of the captain of the football team. However, she didn’t expect her estranged cousin to join the team too. Micah is instantly branded a freak for wearing a kippah and praying during games, and Essie doesn’t want anything to do with him. As the football team’s teasing of Micah shifts into hazing, Essie struggles to do what is right—even though it might mean losing her new friends and boyfriend.

Essie "Esther" Green wants sophmore year to be different. So she decides to reinvent herself and become a cheerleader. It's only an added bonus when she manages to catch the eye of Austin King, the school's hottest guy and high school quaterback for the football team. Essie couldn't be any more happier; but then Micah, her estranged cousin moves back to town and joins the football team. There's nothing wrong with Micah per se... he just takes his jewish heritage more seriously than Essie does. But everyone else thinks pegs him as a freak and Essie is torn: should she defend the cousin she barely knows or just stay quiet?

Queen of Secrets had an interesting premise and I was curious to see how Jenny Meyerhoff would play it out; I wasn't entirely disappointed...but I wasn't entirely satisfied either. I thought Essie was a sweet girl but as the situation with Micah progressed, I grew increasingly frustrated with how long it took for Essie to finally stand up for her cousin. It took FOREVER. (like more half-way through the book!) She was so afraid to speak up when Austin's crowd (especially Austin's best friend) started heckling Micah that I wondered what would finally break her silence. Another thing that nagged me was the lack of explanations for certain things. Essie mentions her trio of best friends: Sara, Skye and Zoe. But as the story pressed on, Skye and Zoe fade into the background and randomly pop up at the end. Essie says that these girls are her best friends but I didn't feel Essie made an actual effort to try to hang out with them. Sara was the only friend that showed up regularly throughout the story; which brings another issue into focus. Sara and Essie drift apart a little but then patch things up. You don't see them actually make up-it's only briefly implied. This wouldn't normally bother me but I felt like Essie made enough mistakes that it warranted an actual face-to-face meeting with Sara.

Now onto the details I liked about this novel: The religious aspect to the story. Meyerhoff managed to tie it in very well into the story. Also, I admired Micah's character. He's much more observant with his religion and he's always true to himself despite what everyone else thinks. He made Essie more aware of her insecurities as an individual and opened her eyes to a lot of things their family shut her away from. He was basically the catalyst that she needed. Now, as to how I felt about the book in its entirety? I would've enjoyed it far more if not for its minor flaws... I would recommend getting this from the library first to see if it's to your taste or not.