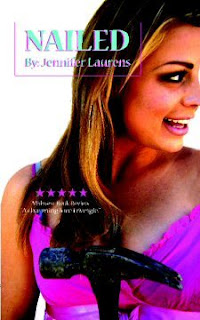 Synopsis: One girl. Two guys. Who says three's a crowd? When Mandy takes an unusual summer job-in construction-she has to prove she's just one of the guys. But she gets more than she bargains for being the only girl on the job. The mixture of hot guys, sunscreen, raw wood and testosterone proves to be an elixir she can't protect her heart from. Brooding Boston and flirty AJ find themselves looking at Mandy as more than just a girl who holds a hammer. Mandy soon finds herself not only lost in a whirlwind of a male-dominated world, but also the center of an inadvertently "constructed" love triangle. Mandy must choose between two guys who want her heart. But what's a girl to do when she wants them  both?

Mandy's dream has always been to go into the construction business so after graduation she immediately starts apprenticing at her father's business with her brother Marc as her boss. Despite this annoying detail, Mandy looks forward to working for the summer doing what she loves best. She didn't expect to find romance on the job...especially with two of her handsome co-workers.

Nailed had all the prerequisites for a fluffy read--a bubbly main character, a fun setting and a predictable plot that leaves almost no room for surprises. Toss in two hot guys to create a love triangle and you've got yourself a girly, romantic book. But as cute as this story was, it fell kind of flat for me. The story really had no point other than seeing who Mandy would choose--would it be A.J, the older, flirty carpenter that's obviously interested in her or Boston, the enigmatic guy who causes a parade of butterflies to stir within her? As the reader it's easy to follow the story line; especially when Mandy's interactions with Boston and A.J. goes in different directions... I won't say who she chooses but one romance fizzles while the other sizzles. (Look, I rhymed! I didn't mean to, honestly. It just happened. Anyways...) Usually I'm a fan of light, breezy reads but this one didn't just didn't deliver...it simply lacked substance. Which is such a shame since I really enjoyed the characters-their personalities were entertaining and so much more could've been done with them. There's no conflict, other than Mandy having to choose which guy she wants. (Although it's made abundantly clear who she truly wants, so really, no conflict.) Although Nailed wasn't a fascinating novel, I wouldn't completely ignore it: if you're looking for a no-brainer, day-at-the-beach kind of book, then I'd advise picking it up. It's like cotton candy-not very fufilling but easy to swallow.