Inside Out by Maria V. Snyder 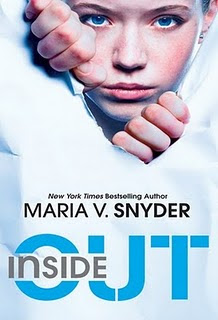 Synopsis: Keep Your Head Down. Don't Get Noticed. Or Else. I'm Trella. I'm a scrub. A nobody. One of thousands who work the lower levels, keeping Inside clean for the Uppers. I've got one friend, do my job and try to avoid the Pop Cops. So what if I occasionally use the pipes to sneak around the Upper levels? The only neck at risk is my own…until I accidentally start a rebellion and become the go-to girl to lead a revolution.

Living as a scrub within the lower levels of Inside means having a very restricted lifestyle.  Jobs are chosen for you, regardless of whether you like it or not, and schedules are set for everyone to comply with; freedom is a distant memory for most scrubs. Chosen to clean the pipes and shafts of the lower levels because of her small size, Trella is used her monotonous life and chooses to spend most of her time alone, away from everyone else. Her anti-social behavior give her fellow scrubs the idea of dubbing her the Queen of the Pipes---a nickname that undoubtedly suits her... and gets her into trouble when a "prophet" from the upper levels challenges her to find Gateway, a supposed way out of Inside. This unwanted invitation to seek out the truth leads Trella to uncovering a secret plot that could change everything she's ever known....

When I first received Inside Out, I admit I was a little worried that I wasn't going to like this book; I've only ever read one other novel by Snyder and it was Poison Study, the first in the Study series. I was blown away by it, to say the least. So I was a bit apprehensive when I opened the book and began reading the first page. Would this book impress me just as much as Poison Study did? Or would it completely disappoint me?  After reading a mere five pages, my doubts vanished and I let myself get sucked into Trella's world. The pace was slow but that's only because of the incredible detail that Snyder gives us so the reader can imagine the complex and frightening world of Inside. Trella herself is a complex character--she's not the friendliest scrub you'll encounter; she's headstrong, unafraid of taking risks but as the chapters progress, her tough demeanor is slowly chipped at (the pace speeds up a notch) and you get a glimpse of her vulnerability once she comes across the many obstacles that await her throughout the story. And there were many, many obstacles. You don't know what's going to happen next and this kept me completely hooked to the story. There were so many twists and turns that the journey to the ending was absolutely exhilirating and left me wanting more. Snyder definetely knows how to write an action-packed adventure! She also did a wonderful job of inserting a light-hearted, subtle romance within this story; I really enjoyed Trella's interactions with her adorable love interest. Their budding relationship was a pinpoint of light intermixed with the foreboding darkness of the rebellion and whenever they weren't worried about being tracked down by their enemies, they were just the cutest thing ever!

Snyder's Inside Out was an excellent story filled with clever characters, insane plot twists and an ending that leaves the reader satisfied but hints just enough that there may be a sequel in the future. If there is a sequel, you can bet that I'll be eagerly awaiting for the next installment in this series. I can't wait!