Humans and androids crowd the raucous streets of New Beijing. A deadly plague ravages the population. From space, a ruthless lunar people watch, waiting to make their move. No one knows that Earth’s fate hinges on one girl...

Cinder, a gifted mechanic, is a cyborg. She’s a second-class citizen with a mysterious past, reviled by her stepmother and blamed for her stepsister’s illness. But when her life becomes intertwined with the handsome Prince Kai’s, she suddenly finds herself at the center of an intergalactic struggle, and a forbidden attraction. Caught between duty and freedom, loyalty and betrayal, she must uncover secrets about her past in order to protect her world’s future.

This was such a fun and imaginative story and along with the unique twist of Cinderella being a cyborg? Of course I enjoyed Cinder.  Cinder herself was a fully developed character who I immediately liked; she's always been the underdog but she's managed to get by and when given the chance, she proves to be a loyal friend. I especially liked the scenes where Cinder would slide into her mechanic mode, downloading blueprints and figuring out how to fix things. Her thoughts about fixing andriods would inadvertently shift into thoughts of her own existence as a half human, half cyborg and how this has always defined her. I found those moments (along with her interactions with Iko, a funny little andriod with some tendencies that were too human-like in character) particularly enjoyable.

Cinder's interactions with her family did in some ways resemble the original fairy tale but rather than having two horrid stepsisters, Cinder finds a friend in the younger sister, Peony. It was nice to see that at least one person in Cinder's household accepted her for who she was. (Although I will say that her stepmother is a piece of work. Omg.) And as for the romantic element to the story, it was nice but I was much more interested in the politics going on between the Commonwealth and the Lunar Queen (who is quite evil and makes Cinder's stepmother look like a kitten).

Final Verdict: Cinder was a great book and despite almost reaching 400 pages, I sped through this story very quickly. Meyer has this way of writing that balances giving the reader just enough information without being too loaded. The detailed passages also showed some excellent world-building which I definetely appreciated. The only drawback for me, really, was that I quickly figured out what "the big mystery" was but that didn't stop me from enjoying Cinder. I haven't allowed myself to get attached to series lately but I'm willing to make an exception for Meyer's planned quartet. I have to know what happens next. 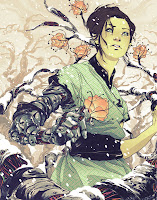 Some bonus material for those who are curious! There is a free short story prequel to Cinder available on Tor.com  It doesn't contain any spoilers and it's definetely worth checking out (especially if you want to see how you feel about Meyer's writing style). I read it earlier today and I lurved it so I hope you do too ;)