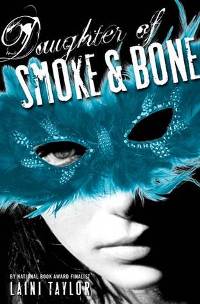 Around the world, black handprints are appearing on doorways, scorched there by winged strangers who have crept through a slit in the sky.

In a dark and dusty shop, a devil's supply of human teeth grown dangerously low.

And in the tangled lanes of Prague, a young art student is about to be caught up in a brutal otherwordly war.

Meet Karou. She fills her sketchbooks with monsters that may or may not be real; she's prone to disappearing on mysterious "errands"; she speaks many languages—not all of them human; and her bright blue hair actually grows out of her head that color. Who is she? That is the question that haunts her, and she's about to find out.

When one of the strangers—beautiful, haunted Akiva—fixes his fire-colored eyes on her in an alley in Marrakesh, the result is blood and starlight, secrets unveiled, and a star-crossed love whose roots drink deep of a violent past. But will Karou live to regret learning the truth about herself? [from goodreads]

I can sum up my feelings for this book in one simple sentence: THIS BOOK OWNS MY SOUL. It was one of the best books I read in 2011 (if NOT the best book I read) and it's one of the best stories I've had the pleasure of reading in a while. Daughter of Smoke & Bone sparked my interest when I first heard about it but I wasn't sure what to expect since I never read any of Taylor's other novels. I was fortunate enough to get an arc at BEA and I'll admit, I took a while to read it. But once I did? Sweet baby jesus, I hadn't had a book capture me and hold me ransom like that in a long, long time. The writing entranced me within the first chapter and by the time I finished I was pretty much possessed; I became just as enamoured with her prose as I was with the story and characters. (Sometimes the setting itself felt like a character. It was that detailed and lovely!)

Ah, the characters! All of them were great, especially Karou's family. (Brimstone ♥) And Karou, the girl who travels around the world through portal doors and has blue hair? I'm so jealous I wish I had her life. She was a very warm, witty leading character brimming with life and creativity. I loved everything about her and her story. There was a twist that I didn't see coming (although I should have but that's probably because I was too busy basking in Taylor's gorgeous writing) but it added an extra layer of depth to an otherwise wonderful story.

Final Verdict: Daughter of Smoke & Bone was my first time reading any of Laini Taylor's work and  despite that it's only my first time sampling her writing style, I instantly became a fan. How could you not? She has this beautiful imagination that can weave a fantastic story and her exquisite writing proves that she is an incredibly talented wordsmith. This book got a lot of hype but it truly lived up to its reputation and then some. I even went out and it within the first week of its release. It sits proudly next to my arc and I can never pass my bookshelf without rereading some of my favorite passages :)
Clickables: {main site/blog} {twitter}
Posted by Sandy at 3:48 PM